source link: https://www.androidcentral.com/google-pixel-fold
Go to the source link to view the article. You can view the picture content, updated content and better typesetting reading experience. If the link is broken, please click the button below to view the snapshot at that time. 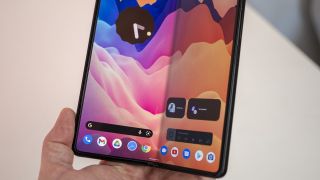 A mock-up of what the Pixel Notepad could look like (Image credit: Nick Sutrich / Android Central)

For months, over-confident leakers claimed Google planned to release a Pixel foldable phone alongside the Pixel 6 in fall 2021. Unfortunately, the Pixel launch event came and went without a foldable. Then leakers promised an early 2022 release to go with Android 12L, but that too proved incorrect.

Google hasn't announced its foldable phone yet, nor do we have an official name, but we've seen enough leaked information to know Google has developed several foldable prototypes (passport and jumbojack) and may call its foldable the Pixel Notepad. But does that mean we'll actually see a release this year? Leakers think so, but that doesn't mean it'll happen.

Samsung, Huawei, and Motorola all pioneered the category of foldable phones, pushing out expensive prototypes to eager consumers. But phones like the Galaxy Z Fold 3 and OPPO Find N changed the conversation around foldable phones, proving they can offer a premium experience that slab-shaped phones can't.

That puts more pressure on Google, which will enter the foldable market as other companies refine and master their own designs. It won't have as much leeway for failure and experimentation as Samsung did with its first attempts.

What will the Pixel Fold look like, when will it arrive, and could it have more than one design? We'll answer all your questions with all the leaked info we could scrounge up.

We first heard of the Fold, codenamed "passport," from a leaked internal Android document, which referenced the Pixel 5a, 6, 6 Pro, and foldable Pixel as 2021 releases. The first three phones did ship this year, while the latter must have needed more time to gestate.

There isn't hard info on when the Pixel Fold will launch, now that the rumors about it appearing alongside the Pixel 6 have proven false. Yet a recent Google Camera APK deep-dive revealed references to the code "isPixel2022Foldable," which pretty clearly indicates a foldable could arrive this year.

DSCC CEO Rick Young claims Google will begin its foldable production in Q3 2022, aiming for a Q4 2022 release. That suggests it would launch alongside the Pixel 7 and Pixel Watch in October 2022.

Given the Galaxy Z Fold 4 likely will launch in late summer, that would mean some robust competition. In fact, the current rumored name — Notepad — could be a way for Google to differentiate its "Fold" phone from the Z Fold lineup.

Young previously claimed Google planned to release its phone in late 2021, using the same glass and design as the Z Fold 3. He later reported Google had canceled the order in November. So it's clear that even if Google plans to release the phone this year, it may not actually happen.

Google may have two foldable phones in the pipeline. One is the actual Google Pixel Notepad that has been the subject of multiple leaks. The other is more of a mystery.

As we already explained, Google has been working on its "Passport" Pixel foldable phone since 2020, if not earlier. The most recent Pixel Fold leak revealed a new foldable codename — "Pipit" — but this likely refers to the same device, which will have a similar horizontal-folding, tablet-sized display to the Galaxy Z Fold 3.

But code leaks suggest that Google may have another foldable Pixel phone, codenamed "Jumbojack." A code deep-dive from 9to5Google noted that Android devs had used this mysterious Pixel foldable for a variety of software tests based on the "posture" of the phone, such as "half-opened" or "flipped."

These two codenames evoke a passport opening horizontally and a Jumbo Jack cheeseburger opening vertically, respectively; so in theory, Google could release either or both foldables after the new Android 12L software is ready. However, internal documents have only pointed to "Passport" coming out anytime soon.

We suspect Jumbojack will never ship, and was simply designed as a way for Google to test vertical-folding phones internally for its Android 12L release. But in theory, Google could follow up on its Notepad foldable with a Galaxy Z Flip 3 lookalike down the line.

We've heard several rumors that Google will try to undercut the Z Fold series in price by selling the Pixel Notepad for $1,400 — $400 less than the Z Fold 3.

Google took a similar strategy with the Pixel 6 and Pixel 6 Pro, which were priced at $599 and $899, respectively. By selling its flagships for less than the industry rate while offering high-quality performance, Google has made an impression on Android fans.

Of course, $1,400 is still much more than most people would ever spend on a phone; most people bought the Z Fold 3 through carrier deals, after all. So we'll have to see what kinds of trade-in deals people can find for Google's foldable phone.

Samsung plans to make its Z foldables available in over 100 countries. But Google has always taken a more measured strategy for its phone availability. For example, the Pixel 6 is available in just nine countries — Australia, Canada, France, Germany, Ireland, Japan, Taiwan, United Kingdom, and the United States — with three more to come in 2022 (Spain, Italy, and Singapore). Meanwhile, the Pixel 5a only shipped to the United States and Japan.

It's unlikely that the Pixel Fold will sell outside of Google's typical markets. So depending on where you're based, you may have to stick with Samsung or OPPO for your foldable fix.

Back when we thought the Pixel Fold would arrive in 2021, the rumors suggested it would have a 7.6-inch foldable display with Ultra-Thin Glass, using the same display materials as the Galaxy Z Fold 3. But as we mentioned, Google canceled that order, and now may use a design that evokes a different foldable instead.

But frankly, animations created to show off software don't prove anything definitive. We haven't seen any leaked photos of the device, nor do we know much about the cover display and how it'll compare to Samsung's or OPPO's.

We do know from a Pixel Fold camera leak that Google planned to use the same 12MP camera sensor found in older Pixel phones. That would match the Z Fold 3 12MP sensor and ensure the phone remains relatively thin when folded, compared to most thick flagship cameras. But that leak is relatively old, and Google may have changed its plans since then.

Google patented a foldable design (via Patently Apple) back in 2018 that shows off a clever three-screen design with a hinge and a smaller rectangular display that slides out to increase the footprint of the device. However, most patents don't end up reflected in their company's final designs.

We'll also have to wait and see whether the Pixel Fold will have a built-in slot for a stylus. Google could design a new, more compact Pixelbook Pen to go with its foldable. The Z Fold 4 may have a built-in stylus port, which would give the popular foldable brand another edge.

Originally, all signs pointed to the Google Pixel Fold using Google Tensor as its SoC. The Android 12 beta source code found references to "Passport" using the same hardware as the Pixel 6 lineup. But given the year-long delay, it's more likely the Pixel Notepad would use the new Google Tensor chip, called GS201 and codenamed "Cloudripper."

Google Tensor is a custom silicon platform made by Google and Samsung LSI that gave the Pixel 6 lineup a processing boost compared to past Pixels. The Pixel 6 series has had some issues with hardware bugs, but Cloudripper will likely address many of those issues.

Also, given the premium price, we'd expect the foldable phone to have 12GB of RAM, same as the Pixel 6 Pro (and Z Fold 3). Combined with Tensor 2.0, that'll put it on par with the best Android phones, at least for speed.

And while we don't know whether the Notepad is still 7.6 inches as originally rumored, we'd expect it will have the same QHD+ resolution and 120Hz refresh rate with LTPO for variable refresh rates, too. Anything less would make the Notepad look overpriced.

Android 12 arrived on October 19 alongside the Pixel 6, bringing with it some substantial feature updates and a snazzy design language called Material You. The Pixel 6 has an updated Security Hub, Pixel Call Screening, voice typing, Instant Translation, and other AI-backed tools, and the Pixel Fold will get all of these tools and more.

Still, it's Android 12L that'll define your experience with the Pixel foldable phone. The folded Pixel will work like any portrait or landscape-oriented phone. But it adds a multi-window layout for all apps for split screens, so when you open up your phone you'll immediately see more content from that app all at once.

You can also place your favorite apps in a taskbar, then drag and drop them into one half of the foldable display so that you can multitask with ease. You'll be able to reveal or hide the taskbar at any time with a long press, so you're not constantly losing screen space to use it.

We'll have to wait and see how "stock" Android performs on foldables and how it compares to unique software developed by competitors like Samsung — which uses similar tools with One UI 4.1. In the end, that'll matter more than hardware for deciding how the Fold, or Notepad, stacks up against the best foldable phones.

We don't know for sure when the Pixel Notepad will arrive. If you don't want to wait, the Z Fold 3 is the best foldable available today, with blazing performance for gaming and browsing, plus superb software that takes full advantage of the mini tablet-sized display. If you can stomach the price, it'll receive support and improvements for years to come.