source link: https://techxplore.com/news/2022-04-amazon-workers-nyc-vote-unionize.html
Go to the source link to view the article. You can view the picture content, updated content and better typesetting reading experience. If the link is broken, please click the button below to view the snapshot at that time. 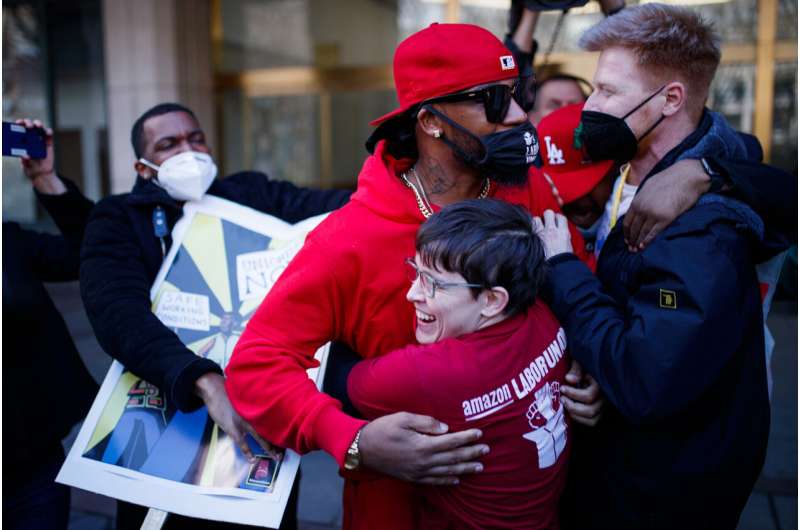 Amazon workers in Staten Island, New York, voted to unionize on Friday, marking the first successful U.S. organizing effort in the retail giant's history and handing an unexpected win to a nascent group that fueled the union drive.

Warehouse workers cast 2,654 votes—or about 55%—in favor of a union, giving the fledgling Amazon Labor Union enough support to pull off a victory. According to the National Labor Relations Board, which is overseeing the process, 2,131 workers—or 45%—rejected the union bid.

The 67 ballots that were challenged by either Amazon or the ALU were not enough to sway the outcome. Federal labor officials said the results of the count won't be verified until they process any objections—due by April 8—that both parties may file.

The victory was an uphill battle for the independent group, made up of former and current workers who lacked official backing from an established union and were out-gunned by the deep-pocketed retail giant. Despite obstacles, organizers believed their grassroots approach was more relatable to workers and could help them overcome where established unions have failed in the past. They were right.

Chris Smalls, a fired Amazon employee who has been leading the ALU in its fight on Staten Island, bounded out of the NLRB building in Brooklyn on Friday with other union organizers, pumping their fists and jumping, chanting "ALU." They uncorked a bottle of Champagne, and Smalls hailed the victory as a call to arms for other Amazon workers across the sprawling company.

"I hope that everybody's paying attention now because a lot of people doubted us," he said.

Smalls hopes the success in New York will embolden workers at other facilities to launch their own organizing campaigns. Even his group will soon shift their attention to a neighboring Amazon warehouse on Staten Island, where a separate union election is scheduled to be held in late April. Organizers believe Friday's win is going to make it easier for them to win there, too. 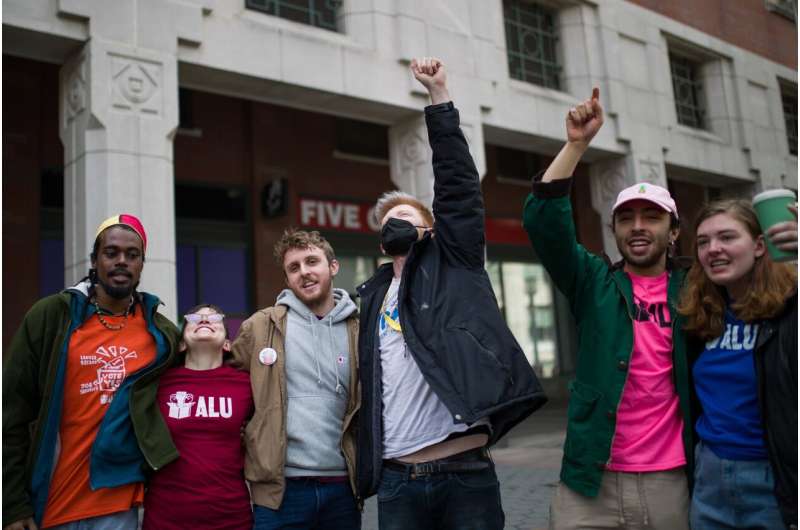 Amazon posted a statement on its company website Friday saying that it was evaluating its options following the election.

"We're disappointed with the outcome of the election in Staten Island because we believe having a direct relationship with the company is best for our employees," the post said. "We're evaluating our options, including filing objections based on the inappropriate and undue influence by the NLRB that we and others (including the National Retail Federation and U.S. Chamber of Commerce) witnessed in this election."

The company did not elaborate but it signaled it might challenge the election based on a lawsuit filed in March by the NLRB, which sought to force Amazon to reinstate a fired employee who was involved in the union drive.

NLRB spokesperson Kayla Blado responded to Amazon's statement by noting that the independent agency has been authorized by Congress to enforce the National Labor Relations Act.

"All NLRB enforcement actions against Amazon have been consistent with that Congressional mandate," she said.

Mark Cohen, director of retail studies at Columbia University, said he doesn't see how workers will benefit from a unionized Amazon facility and called the overall push to unionize companies misguided. He said that Amazon is a "highly disciplined and regimented" business willing to pay premium wages and good benefits, but it also demands tremendous output from its workers who work 10-hour shifts.

"Amazon is not going to change their culture because there is now a union in their midst," Cohen said. ""They might be forced to let people work eight hours but those people will make less money." 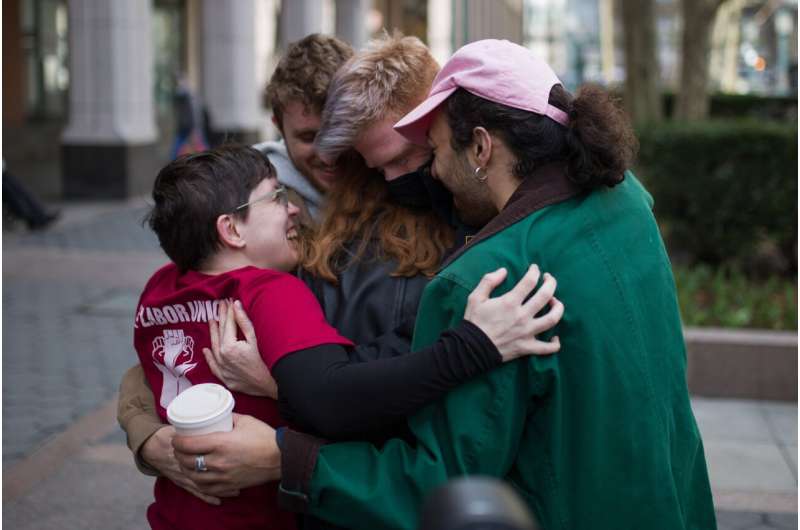 The successful union effort on Staten Island stood in contrast to the one launched in Bessemer, Alabama by the more established Retail, Wholesale and Department Store Union. Workers at an Amazon warehouse there appeared to have rejected a union bid but outstanding challenged ballots could change the outcome. The votes were 993-to-875 against the union. A hearing to review 416 challenged ballots is expected to begin in the next few days.

The union campaigns come at a time of widespread labor unrest at many corporations. Workers at more than 140 Starbucks locations around the country, for instance, have requested union elections and several of them have already been successful.

But Amazon has long been considered a top prize for the labor movement given the company's massive size and impact. The results in Staten Island reverberated all the way to the White House.

"The president was glad to see workers ensure their voices are heard with respect to important workplace decisions," White House press secretary Jen Psaki said at Friday's briefing about the vote. "He believes firmly that every worker in every state must have a free and fair choice to join a union and the right to bargain collectively with their employer."

John Logan, director of labor and employment studies at San Francisco State University, said the union win was a potential tipping point two years into a pandemic that has shifted the labor landscape.

"We knew that unions were having a moment, but this is much bigger," Logan said "There is no bigger prize than organizing Amazon."

He added that the ALU's win defies traditional thinking that only national unions can take on big companies. But the group might still have a fight ahead of it, according to Erin Hatton, a sociology professor at the University of Buffalo in New York. 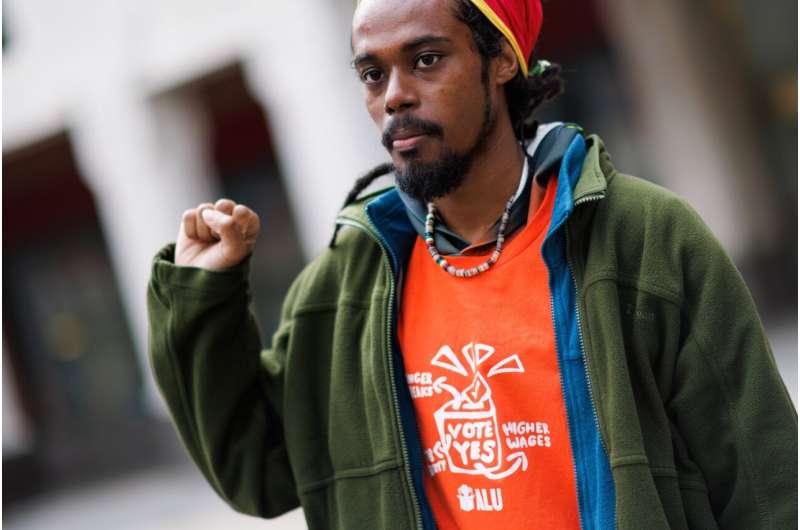 Amazon Labor Union (ALU) member Tristan Lion Dutchin, 27, gestures as he waits the voting results, Friday, April 1, 2022, in the borough of New York. If a majority of Amazon workers ultimately votes yes in either Staten Island or Bessemer, Ala., it would mark the first successful U.S. organizing effort in the company's history. Credit: AP Photo/Eduardo Munoz Alvarez

Rebecca Givan, professor of labor studies at Rutgers University, said the victory is just the first step in a likely protracted battle against Amazon.

"It's clear Amazon will keep fighting, they're not conceding that workers have a right to organize," she said. "It looks like the legal questions they've raised this afternoon suggest they're trying to undermine entire authority of NLRB."

Amazon has pushed back hard in the lead-up to both elections in Staten Island and Bessemer. The retail giant held mandatory meetings, where workers were told unions are a bad idea. The company also launched an anti-union website targeting workers and placed English and Spanish posters across the Staten Island facility. In Bessemer, Amazon has made some changes to but still kept a controversial U.S. Postal Service mailbox that was key in the NLRB's decision to invalidate last year's vote.

Both labor fights faced unique challenges. Alabama, for instance, is a right-to-work state that prohibits a company and a union from signing a contract that requires workers to pay dues to the union that represents them.

The union landscape in Alabama is also starkly different from New York. Last year, union members accounted for 22.2% of wage and salary workers in New York, ranked only behind Hawaii, according to the U.S. Bureau of Labor Statistics. That's more than double the national average of 10.3%. In Alabama, it's 5.9%.

Amazon workers in Staten Island are seeking longer breaks, paid time off for injured employees and an hourly wage of $30, up from a minimum of just over $18 per hour offered by the company. The estimated average wage for the borough is $41 per hour, according to a similar U.S. Census Bureau analysis of Staten Island's $85,381 median household income. 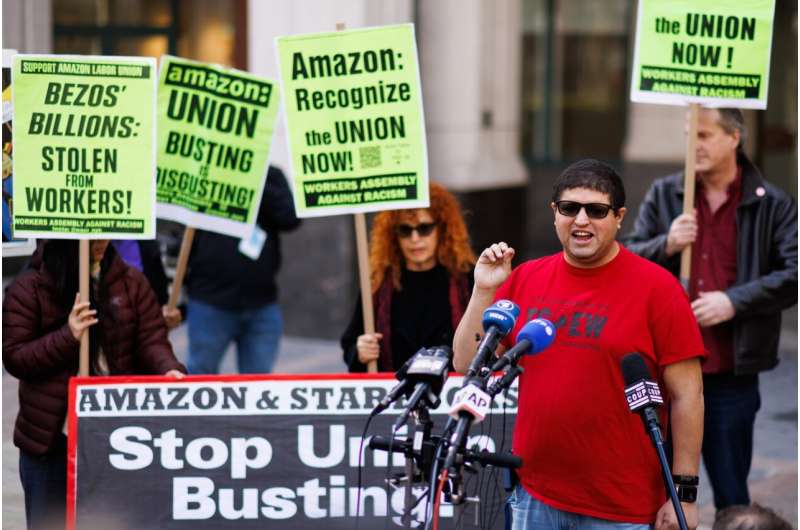 Tristan Dutchin, who began working for the online retailer about a year ago, is hopeful that the new union will improve working conditions at his jobsite.

"I'm excited that we're making history," Dutchin said. "This will be a fantastic time for workers to be surrounded in a better, safer working environment."

Tinea Greenaway voted against unionizing but said she would reserve judgment for now.

"We can't take back our votes," she said. "I'll give things a chance, but let's see if they deliver on what they promised."