source link: https://www.allaboutcircuits.com/news/new-chips-infineon-ti-toshiba-drive-advances-autonomous-driving/
Go to the source link to view the article. You can view the picture content, updated content and better typesetting reading experience. If the link is broken, please click the button below to view the snapshot at that time.

As the autonomous vehicle market heats up, new MCUs and ICs have hit the market this year to enable new ADAS functionalities.

This week, reports emerged that Volkswagen is in talks with Huawei to acquire Huawei's autonomous driving unit for billions of euros. With the landscape for autonomous vehicles getting more competitive, many automakers are turning the chipmakers for technology partnerships. In fact, this week, Jaguar Land Rover announced a partnership with NVIDIA. By 2025, all of the company's vehicles will come with NVIDIA's Drive computers.

Here are a few other chip-level technologies that are accelerating the integration of autonomous features in the next generation of vehicles.

The first that we will discuss was recently showcased at CES 2022 in Las Vegas. Infineon Technologies unveiled a new generation of its AURIX microcontroller unit (MCU) family, the TC4x series. This series is designed for applications including automotive electric-electronic (E/E) architectures, advanced driver-assist systems (ADAS), and artificial intelligence (AI).

The AURIX family is already focused on high-growth and safety-critical applications, such as powertrain and ADAS systems, and the improved TC4x series is looking to continue that trend by also adding an ecosystem optimized for fast time-to-market and ease of use. The new heterogeneous architecture may enable computing abilities for a range of implementations. Image used courtesy of Infineon Technologies

The former TC3x series offers many specifications such as:

The device also includes a variety of communication interfaces, such as PCIe, 5 Gbps Ethernet, and CAN-XL.

More than 50% of crashes occur at or near intersections. To help decrease this figure and promote higher traffic safety, the New Car Assessment Program (NCAP) has released standards forcing automakers to improve steering systems to implement ADAS functionality. At the core of these systems are the sensors that provide vision to the world around them. Now, Texas Instruments (TI) claims to have created the only “eyes” on the market that can pass the NCAP standards.

The company recently released its new high-resolution 77-GHz radar sensor. TI says this new sensor, the AWR2944, can detect moving objects at a distance that is 40% farther than any competitor in the market. The solution is said to be 30% smaller than competing radar sensors while adding a fourth transmitter to improve resolution by 33%. 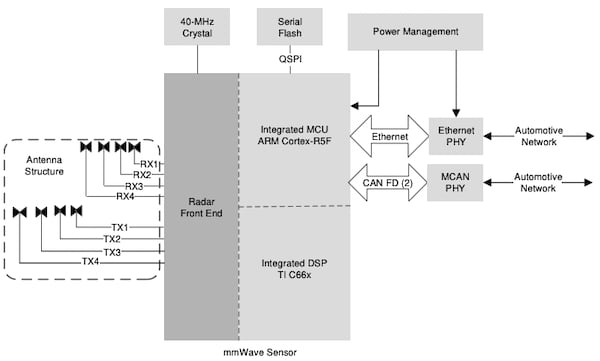 The Dopper Division Multiple Access (DDMA)-based signal processing is reported to improve the sensing distance by 40%. This sensor solution pairs to TI’s current suite of ADAS solutions, including its edge AI processors and automotive-qualified PMICs.

Lastly, Toshiba is also driving automotive innovation by adding to its current line-up of Ethernet bridge ICs with the TC9563XBG. This device allows support for communication at up to 10 Gbps in automotive applications. It is also being designed to work within Zone Architectures, a network scheme where the environment is split into multiple collaborative zones. 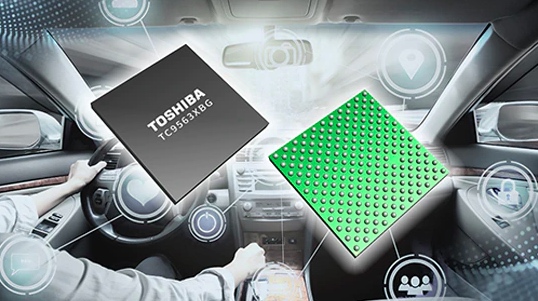 The new IC provides two-port 10 Gbps Ethernet and three PICe Gen 3 switch ports (one four-lane upstream and two one-lane downstream ports). It can work with a variety of interfaces for real-time and synchronous processing. On top of this, there is also support for single-root I/O virtualization (SR-IOV), which is a standard for virtualizing PCIe devices.

This new solution is fit for more than automobiles; it can also be used for industrial equipment. TC9563XBG is a successor to the Toshiba 1 Gbps Ethernet bridges, the TC9560 and the TC9562, and is AEC-Q100 Grade 3 qualified.

The Next Generation of Mobility

A variety of companies are helping to progress smart automobiles. As the industry continues to push closer to widespread EV adoption and autonomous vehicles (as many theorize), these companies will need to move the needle in circuit-level hardware design.