source link: https://diginomica.com/zuckerbergs-dream-meets-business-realism-nvidia-omniverse-enterprise-metaverse
Go to the source link to view the article. You can view the picture content, updated content and better typesetting reading experience. If the link is broken, please click the button below to view the snapshot at that time.

When a product doesn't succeed, rebrand. It's one of the oldest concepts in marketing and often used to give technology companies a fresh image — does anyone remember Research in Motion, aka Blackberry? Heck, does anyone remember Blackberry (but that's another story)? We are amidst the latest and perhaps largest rebrand in tech history since it covers both a perennially overhyped concept, augmented-virtual reality (AR/VR), that never (can't be allowed to?) dies and the seventh-largest company by market cap, Facebook. With both concept and company in need of a boost, the idea-shapers in Silicon Valley decided some rebranding was just the ticket to breathe new life into some tired products. Thus, AR/VR becomes the Metaverse (beyond the universe) and Facebook morphs into Meta (something after a thing we've all grown to detest).

While Mark Zuckerberg might believe that there's money to be made by convincing everyone to utterly abandon the flawed physical world for his ideal (data mined, ad infested and hence, profitable) virtual one, there's another side to virtual reality that is decidedly fixated on dollars and cents. NVIDIA believes that dominating the creation, rendering and simulation of these commercial virtual worlds will be its next significant source of growth and innovation. The company introduced Omniverse software for 3D scene creation and editing in 2019, but the intervening months have seen it expand from the creative world of Hollywood CGI artists and Silicon Valley game developers into the industrial world of 3D digital twins, virtual duplicates of physical environments that are more easily manipulated and simulated than the messy physical world.

Omniverse uses data from physical (IRL) sensors, applications and online activity to inform the design of realistic 3D models and spaces and as input for physically accurate simulations using scientifically accurate, i.e. in accordance with physics, calculations. In marketing parlance, these virtual models and worlds are digital twins, of reality, but like any synthesized object, can easily be manipulated to test its behavior under various conditions, including those that violate the laws of physics (as is often done in movies and games). 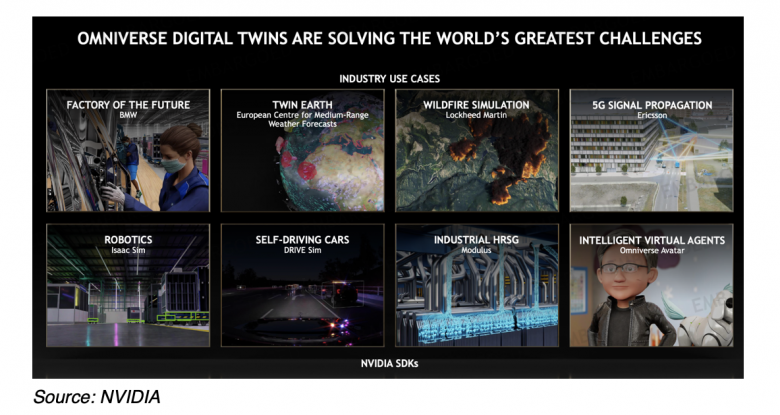 NVIDIA announced several new features for Omniverse and adjacent product, along with some notable industrial applications from early users of the platform. These include: 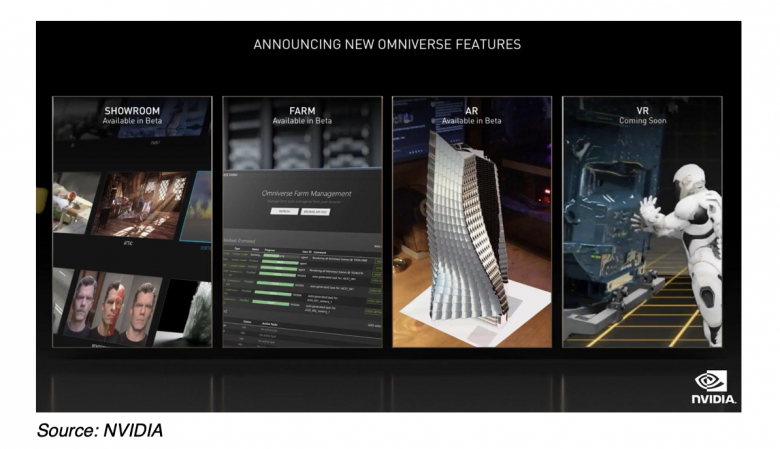 Huang's confidence in the power of AI and 3D simulation technology is so unbounded that he committed to building a whole-Earth simulator called Earth 2:

We will build a digital twin to simulate and predict climate change. This new supercomputer will be E2, Earth 2, the digital twin of Earth, running Modulus-created AI physics at a million times speeds in the Omniverse. All the technologies we’ve invented up to this moment are needed to make E2 possible. I can’t imagine greater and more important news.

He predicts that continued advancements in computing power and AI software will enable global simulation of the atmospheric column at 1-meter resolution at 10ms time increments by 2060; a task requiring 100 billion (10^11) more computing power than that used by current global weather models. 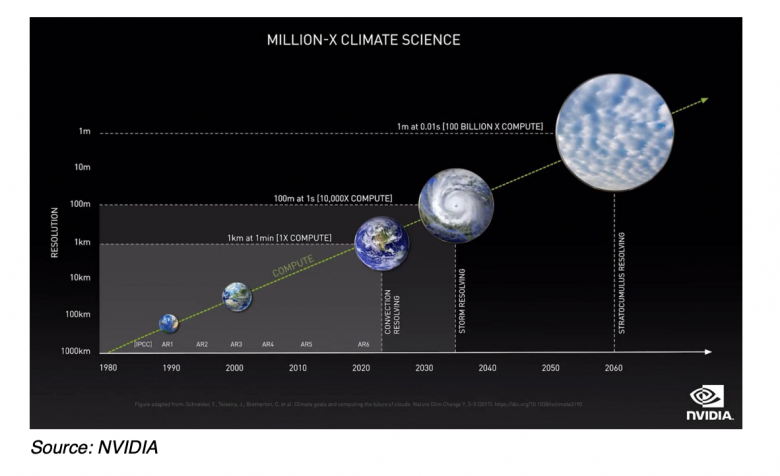 NVIDIA's conflation of its Omniverse simulation platform with the metaverse buzzword is unfortunate since it is guaranteed to tarnish sound, tenable business applications of 3D world-building and simulation with the AR/VR escapism promoted by Zuckerberg and transhumanist utopians. Indeed, such technological idealism could be the undoing of Omniverse and similar techniques as developers, evangelists and enterprise customers begin to associate the ease and speed of running simulations in the virtual world with solving challenging problems in the physical one.

We're already seeing this magical thinking concerning the supply chain imbroglio currently gripping the U.S. Although experts in data science might caution that digital twins and AI simulations won't solve the problem, but merely provide early warning, such nuance is lost when marketers push products and executives grasp for the latest tech elixir promising a way out of their latest mess.

Jon Reed tweeted about a trenchant critique of Facebook's Meta rebranding that provides a cautionary note for NVIDIA's Omniverse exuberance. The zeitgeist described by the author, Brian Merchant, explains much of Silicon Valley's infatuation with virtual worlds and digital twins (emphasis added):

The industry is in need of a new framework, a new apparatus, not just a product or a service or a new sector to mine for enterprise contracts. It needs a new idea, and the metaverse fits the bill. …

Stop trying to get us to put shit on our faces, we might want to yell in unison toward Menlo Park. But the insanity of this moment may be that it may not matter. With enough money on the table, and with the historically juiced tech industry uniting around it like this, we may get a metaverse whether we like it or not.

Hopefully, the harsh realities of shareholder and earnings reports, competitive pressures and the equities market will be enough to dampen the metaverse hype within the enterprise and prevent the exuberance from turning irrational since there are many compelling uses for virtual world simulators like those enabled by Omniverse.

Sadly the history of IT is one of exaggeration and excess; indeed, its the basis for the infamous hype cycle. Complex new technologies get boiled down to trite talking points that lead to unrealistic expectations and much lost time, effort and money. Huang's intelligence and vision have so far prevented NVIDIA from succumbing to such illogic, allowing him to build one of the most innovative companies in Silicon Valley. Still, sometimes history defines the man, making it impossible to buck the existing ethos. We'll see if the metaverse-as-alternate-reality turns into one of those unstoppable forces.