More than 100,000 people have had their eyes scanned for free cryptocurrency

source link: https://arstechnica.com/tech-policy/2021/10/more-than-100000-people-have-had-their-eyes-scanned-for-free-cryptocurrency/
Go to the source link to view the article. You can view the picture content, updated content and better typesetting reading experience. If the link is broken, please click the button below to view the snapshot at that time.

More than 100,000 people have had their eyes scanned for free cryptocurrency 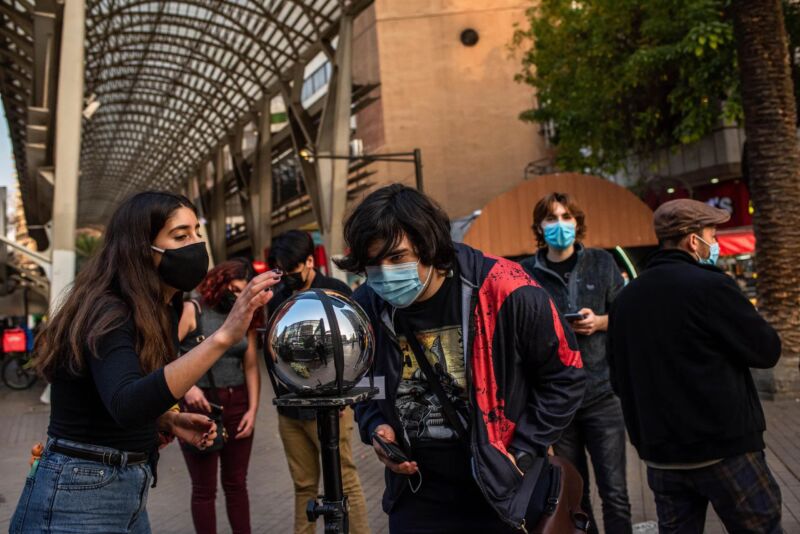 More than 100,000 people have had their eyes scanned in return for a cryptocurrency called Worldcoin, as a project to distribute digital money more widely around the world accelerates.

Worldcoin has distributed about 30 iris-scanning hardware devices, which they call “orbs,” to early users on four continents, who get rewards for signing up more people. Orbs take photos of a user’s eyeballs, creating a unique code that can be used to claim free digital tokens.

The project’s developers said on Thursday they planned to release hundreds of orbs in the coming months and eventually distribute 4,000 devices per month. The team plans to debut the cryptocurrency network early next year and begin giving away the tokens at that time. They have not said how much cryptocurrency users can expect to receive.

Worldcoin amounts to one of the most ambitious and complex attempts to hand out cryptocurrency to the world’s population, similar to the economic concept of universal basic income. The project has already faced feverish criticism, and its own developers admit the “outcome is uncertain.”

Alex Blania, the cofounder of Worldcoin, denied that the project would invade people’s privacy, saying that the orbs convert iris scans into unique strings of letters and numbers before permanently deleting the images.

The resulting code would simply be used to check whether a user has already claimed a share of the Worldcoin tokens.

“Even if I would have your iris code in one form or another, I would have no chance to find out who you actually are on the blockchain,” Blania said, referring to the digital ledgers that underpin cryptocurrencies. Worldcoin is built on the ethereum blockchain.

Blania said about 130,000 people had signed up for the project so far and that the token would be valuable as a technology that can be used for new financial applications.

The team behind Worldcoin has raised $25 million in venture capital, including a round of funding led by Andreessen Horowitz that valued the company, Tools for Humanity, at $1 billion.

Sam Altman, a former president of the Y Combinator start-up accelerator, is also an investor and cofounder of the project. Altman has been a vocal proponent of universal basic income, the concept of providing people with free money on a regular basis.

Worldcoin plans to issue 10 billion tokens in total, with 80 percent going to users, 10 percent to the company’s investors and another 10 percent to a foundation for manufacturing the orbs and developing the network.

Blania said cofounders and employees will receive a portion of the foundation’s tokens, declining to provide an exact figure. A Worldcoin spokesperson said the company planned to set up the foundation before the network’s debut.

Like many cryptocurrency projects, Worldcoin’s tokens are not backed by any hard assets and could fluctuate in value based on their popularity.

Worldcoin estimated that it could reach more than 1 billion people within the first two years of the network’s operation, assuming people continue signing up at current rates and the team meets its orb distribution targets.

People who sign up for Worldcoin will receive their full allotment of tokens over time through a pre-planned vesting schedule, which Blania said was still in development.

Blania said the rate at which Worldcoin is distributed would ultimately depend on the design of the vesting schedule and the pace of user sign-ups.

Worldcoin has so far distributed orbs to 12 countries in Africa, South America, Europe, and Asia. The most productive orb owner has signed up more than 10,000 people in Chile by hiring 20 people who work in shifts, the company said.

© 2021 The Financial Times Ltd. All rights reserved Not to be redistributed, copied, or modified in any way.