Sex Workers Sick of OnlyFans Are Building Their Own Websites

source link: https://www.vice.com/en/article/v7ew3j/sex-workers-sick-of-onlyfans-are-building-their-own-websites
Go to the source link to view the article. You can view the picture content, updated content and better typesetting reading experience. If the link is broken, please click the button below to view the snapshot at that time.

In a call about new adult content regulations that go into effect on Friday, sex workers say their testimonies and demands were met with dismissal.
October 15, 2021, 3:13pm

Starting today, adult content creators and the platforms that host them will have to abide by new regulations laid out by Mastercard. Sex workers say that these new policies will make it even harder for them to survive online, and that Mastercard has ignored their concerns.

Specific details of the new regulations aren't publicly published by Mastercard; however, according to adult industry group Free Speech Coalition, they'll include rules that force platforms and creators to abide by stricter documentation and moderation requirements.

For example, Mastercard will now only do business with adult content creators if everyone in the content provides documentation that they consent to be in the material, to have it distributed, and to have it available for download. Platforms that host live content like cam shows must be able to watch streams and stop or block them at any using automated tools. Mastercard also required all content to be reviewed by platform moderators before it's published to the site; and merchants will have to provide moderation reports on a monthly basis.

"In April, we announced a registration program for banks who connect merchants to our network," Seth Eisen, senior vice president of communications at Mastercard, told Motherboard. "Those banks need to certify that the websites selling adult content have effective controls in place to monitor, block and remove illegal or unconsented content. This program does not impact legal adult activity created by consenting individuals or studios."

"I don’t feel helped by these new policies," a sex worker who asked to remain anonymous said. "By forcing me to fill out a consent 'contract' or upload an ID that protects producers, platforms, and banks from liability, I would have a harder time winning a case against an abusive producer. Sex workers themselves are rarely involved in legal or civil liability for trafficking, CSAM [child sexual abuse material], or other problematic content. I only see this surveillance and these policies as further exploitation not help; they make me less safe."

On Wednesday, Mastercard met with a group of 20 sex workers, activists and allies for a 30-minute call to discuss the new regulations. According to that group, the company dismissed their concerns.

In an email after the call, according to the group, Eisen told them that there would be "no impact" on adult sites' abilities to accept Mastercard as payment.

“Mastercard was not only dismissive of our concerns during our meeting, but never even considered to include us in writing these policies in the first place."

"This program does not prohibit legal adult activity created by consenting individuals or studios," Eisen wrote. "While we appreciate the time of the group today and the diverse perspectives you shared, for a dialogue to be successful, both sides have to have an appreciation for truth and existing laws. Without that, I’m not sure there is a foundation for any further conversation."

The sex workers and allies involved in the call say that this is an unacceptable response.

A sex worker on the call who asked to remain anonymous said that this is just the latest news that will make it harder for her to work. “Losing five bank accounts has not helped me escape harm or exploitation. I have lost bank accounts for depositing cash, getting payouts from sex work sites, using a debit card to place a sex work ad, and depositing cryptocurrency," she said.

"From this meeting it was made very clear that payment processors should not be in the position to offer guidance to banks on how to do business with the adult industry, or make policies that affect the lives of LGBTQ+, BIPOC and survivors working in the adult industry," Pixie, another member of the group that attended the call, said. "This needs to be up to those in the industry themselves and who policies actually affect to come up with proper guidance on how to make our industry safer. Mastercard was not only dismissive of our concerns during our meeting, but never even considered to include us in writing these policies in the first place."

While sometimes imperfect, most adult platforms already have strict moderation and consent documentation policies in place, or have improved on existing practices. Non-adult sites, like Facebook and Instagram, report much higher numbers of abusive material than adult sites, but aren't held up to the same scrutiny as sites that host adult content.

In August, Onlyfans announced that it would ban explicit content from its platform beginning in October—a decision which it reversed after outcry from users. Onlyfans founder Tim Stokely said in an interview that the site was already fully compliant with Mastercard's new rules and that the new regulations had nothing to do with the ban. He did, however, blame discrimination from banks, including Bank of New York Mellon, JP Morgan Chase, and UK-based Metro Bank for closing their accounts and the accounts of sex workers. Discrimination against sex workers by banks and payment processors has a long history, and is made worse by groups that push institutions to comply with religious agendas under the guise of anti-trafficking efforts.

Adult sites have already started alerting users to changes to their terms in light of Mastercards' new regulations. Porn site iWantClips sent an email to creators on Thursday, warning them about changes in content review policies in order to comply with Mastercard's new rules. Those changes include a lag in how long it will take new content to appear on the site in order for the platform to review content, an even longer delay in any content that includes more than one person, and a review process for legacy content. "Repeated non-compliance violations may result in the permanent closure of your store," the email stated. 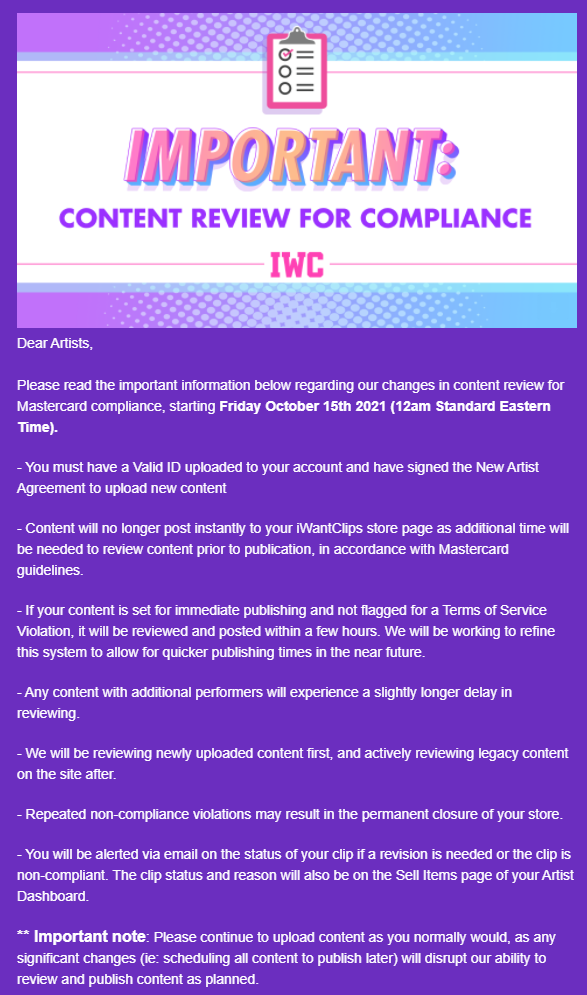 These changes apply across iWantClips’s platform, and not just for users who want to use Mastercard.

Sex workers and activists have been working to raise awareness about these policies, and put pressure on Mastercard to reconsider them, for months. In September, nearly 1,500 sex workers, sex educators, allies and other stakeholders signed a letter demanding that Mastercard halt the policy change and consider the evidence that the new regulations would cause further harm and vulnerability for marginalized workers.

​​"Payment processors should not be dictating platforms' content moderation policies. Mastercard's proposal will lead to more violence and discrimination against vulnerable people, not less," Evan Greer, director at Fight for the Future, said in a statement. "If they move ahead with this proposal and refuse to even pause to listen to more stakeholders, they are in fact saying that acceptance doesn't matter to them. They're throwing LGBTQ+ communities, human rights, and marginalized people under the bus. Full stop."

Correction: This article has been updated to note that Mastercard does allow automated tools to moderate live streaming. Motherboard regrets the error.