source link: https://www.vpndada.com/vpn-review-expressvpn/
Go to the source link to view the article. You can view the picture content, updated content and better typesetting reading experience. If the link is broken, please click the button below to view the snapshot at that time.

Does ExpressVPN still work in China? We are VPN testers based in China. We tested ExpressVPN from China. Here are our test results and review of ExpressVPN:

Does ExpressVPN work well in China? This is our review of ExpressVPN based on real VPN tests done in China. In this review, we will cover Express VPN’s speed, reliability, price, free trial, discount, software, customer service etc. to show whether ExpressVPN is a good for China. In addition to this ExpressVPN review, we have also tested a number of other VPN services from China. If you are looking for a reliable VPN services to be used in China, Please also read our list of Best VPNs for China.

Starting Price: $6.67/mo (with discount offer from this link).

Special Discount Offer: Get 3 Months Free from this link (with one-year plan)

ExpressVPN is one of the big names of the VPN industry with world-wide customers. If you are looking for a reliable big brand VPN provider, you should definitely consider Express VPN. Below is a video about ExpressVPN:

Is ExpressVPN good for China? ExpressVPN has been listed as one of the best VPNs for China by many VPN reviewers. ExpressVPN’s main domain, expressvpn.com, is currently blocked in China, but you can access their website through some other domain names, for example, expressvpn.works.

Based on our tests from China, we confirm that users can sign up ExpressVPN’s services from China and their VPN service can be used in China. In addition to standard payment methods such as credit card and Paypal, Express VPN also accepts Alipay and UnionPay, which is convenient for customers in China.

China is known for blocking and disrupting VPN services. During certain periods, such as days before important political meetings, most major VPN services might become disrupted and VPN users might find great difficulty in connecting to VPN servers. ExpressVPN is not exceptional in this kind of situation. However, based on our observations, ExpressVPN is usually more reliable in “hard times” than other VPN providers (such as Astrill VPN).

For example, in late October 2018, a big attack happened to major VPN services in China. As a result, most VPN services, such as ExpressVPN, VyprVPN etc., experienced a short period of service disruption. Under such situations, some VPN companies would do nothing and just hoped for the best. However, ExpressVPN quickly acknowledged the situation and immediately started working on solutions. An email message was sent out to ExpressVPN’s customers mentioning about the disruption along with a website link for ExpressVPN’s China users to check on the latest status and download the latest software updates to deal with the blocking. With the updated software, released shortly after the disruption, many ExpressVPN’s China users were able to use Express VPN again without any problem. This kind of quick response to China’s VPN blocking really makes ExpressVPN one of the best choices for China’s VPN users.

ExpressVPN has servers in 160 locations from 94 countries with unlimited server switches. For VPN users in China, the best server choices for ExpressVPN are Hong Kong, Tokyo and Los Angeles (on ExpressVPN’s desktop software, China users can see a list of recommended servers to connect).

ExpressVPN offers multiple VPN protocol types including OpenVPN (TCP, UDP), L2TP-IPsec, SSTP and PPTP. Based on our testings from China, for ExpressVPN’s users in China, the best option for VPN protocol is to set it to “Automatic”, which will allow ExpressVPN to automatically pick the protocol most appropriate for the user’s network.

ExpressVPN’s users can connect from computers, tablets and smartphones using their software or apps, which support Windows, Mac, IOS and Android.

For simultaneous connections (or multi-logins), ExpressVPN allows users to connect from up to 5 devices at the same time.

ExpressVPN also offers a feature called “Connection Per App” (split tunneling), which means you can choose which software/apps to use (or not to use) VPN when connected. This feature is very useful for users in China, because as most China users use ExpressVPN to unblock websites, it’s not necessary to use VPN on local software/apps such as WeChat, Baidu Cloud, Aliwangwang etc. With this feature, you can let ExpressVPN bypass those software/apps to that their speed won’t be slowed down.

ExpressVPN can be used to bypass NetFlix’s geo-blocking. With ExpressVPN, you can watch NetFlix’s U.S. programs outside of the United States.

ExpressVPN recently started offering browser extensions, which can be installed to web browsers such as Chrome, FireFox and Safari. ExpressVPN’s browser extension makes it easier to turn VPN on and off because the users can do so without leaving the browser.

We downloaded their desktop client for Mac OS. The installation process was straight-forward and the software interface is clean and intuitive.

With the desktop software, you can connect/disconnect to VPN and also change server locations and switch connection methods.

When the ExpressVPN software is running, an icon will stay on the menu bar (or called system tray on Windows), and it will indicate whether you are currently connected or not.

For mobile phones running the Android operating system, ExpressVPN provides a free app that can be downloaded from the Google Play app store or by following a link to the APK installation file provided on ExpressVPN’s website. We installed this app on a Android phone. This app has a very clean and easy-to-understand user interface. After logging in, you will see a list of servers for you to choose from, including a top recommendation server location, which is Hong Kong in our case. This app also allows users to run a ping test, which will estimate the distance between you and all ExpressVPN locations to help you choose a server closer to you. After connected to ExpressVPN’s Hong Kong server, we were able to access blocked contents such as Twitter, Facebook and Youtube on our Android phone without any problem. We were able to play Youtube videos on this phone and the video streaming experience was very smooth. 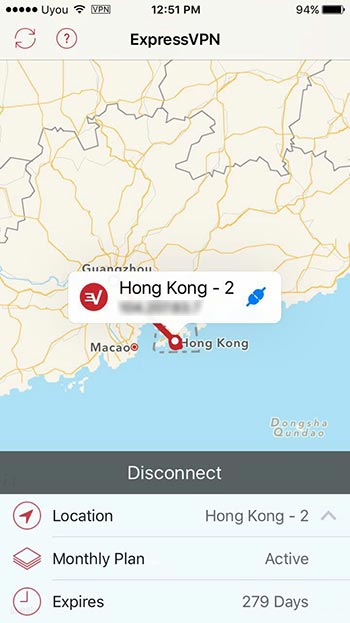 ExpressVPN also provides a free App for iOS. We installed the ExpressVPN app from iPhone’s App Store. ExpressVPN’s iPhone app looks different from its Android App. The iPhone app includes a map showing your current location and the VPN server locations. When you connect to a server, you will see an animated line connecting two dots on the map, which is pretty cool. We were able to connect to Express VPN’s Hong Kong server. After the connection was established, a VPN icon appeared on top of the iPhone screen, indicating the connection success. With Express VPN connected, we were able to access blocked websites such as YouTube, Facebook and Twitter on our iPhone in China. When we played Youtube videos, the speed was very good.

ExpressVPN can also be setup on a compatible Wifi router. ExpressVPN even provides a VPN router app that can be installed on some supported router models. If you are interested, please read our ExpressVPN Router Review.

Is Express VPN stable enough and fast enough to be used in China? For this test, we used a Mac computer from Shenzhen, China. Our ISP is China Telecom. Without VPN, we could get a download speed of around 155.31 Mb/s. Below is the SpeedTest.net test result without connecting to VPN. Please note: this speed only reflects the speed when visiting local websites within China. International speed would be much lower than that. We show this result only to give you a rough idea about how fast our current ISP is:

Then we used ExpressVPN’s Mac desktop client to connect to one of its Hong Kong servers. We got a download speed of 116.34 Mb/s, which is super fast:

We have also tried connecting to one of ExpressVPN’s US Los Angeles servers and got a download speed of of 29.24 Mb/s:

Overall, based on our tests, ExpressVPN offers very fast and stable Internet speed.

Tips for Using ExpressVPN in China

Does ExpressVPN work in China?

The Great Firewall of China not only blocks foreign websites, but also blocks VPN services. As a result, most VPNs don’t work in China. However, despite China’s heavy VPN blocking, ExpressVPN currently still work well in China.

How do I get ExpressVPN in China?

Due to China’s website blocking, the main website of ExpressVPN is blocked in China. ExpressVPN has set up some alternative domain names for users in China to access its service. Once you have signed up an ExpressVPN account, you can follow the instructions provided by ExpressVPN to set up VPN by installing its desktop software or mobile apps. You can also set up ExpressVPN manually on computers, mobile platforms and even Wifi routers.

How to get discount for ExpressVPN?

Why is ExpressVPN not working in China?

The Great Firewall of China has been trying to blocking all VPN services. Although ExpressVPN works most of the time in China, sometimes during heavy VPN blocking, it might stop working for a short period of time. When this happens, usually the ExpressVPN team is aware of this situation and can solve the problem and get it working again very soon. As a user, you should check ExpressVPN’s announcement and also make sure to upgrade your software/app to the latest version. You can also contact ExpressVPN’s live support to get your problem solved.

What if ExpressVPN can’t be found in the Apple App Store in China?

Under pressure from the Chinese government, Apple removed almost all VPN apps from the Chinese version of its app store a few years ago. If you’re using an iOS device, you can temporarily change the region of your Apple account to another country (e.g. USA), or temporarily switch to another Apple account belonging to another country, and download and install the ExpressVPN app. Then you can revert back to the original account.

Where can I download the ExpressVPN Android app in China?

How many devices can ExpressVPN be used on at the same time?

When you purchase ExpressVPN, a single account allows you to use it on up to five devices at the same time (including computers, tablets, and other devices). If you still want to connect more devices, consider setting up ExpressVPN on your router (see our review for ExpressVPN router) so that all the devices connected to this router (unlimited number of them) can now all use ExpressVPN at the same time.

ExpressVPN is a well-known VPN provider and with many customers. Users can sign up for their service from China and their VPN service work well in China. Their 30-day money-back guarantee offer is generous and their customer support is very fast and helpful. Among all VPN providers we have tested, ExpressVPN really stands out with reliable connections, fast speed and excellent customer supports, as well as quick responses to China’s ongoing VPN blocking. Based on our tests, we recommend this VPN provider and have included it in our Best VPNs for China list.

If you are looking for a reliable VPN services to be used in China, Please make sure to read our list of Best VPNs for China.