World Solar Challenge: How Far In A Solar Car?

source link: https://hackaday.com/2020/12/21/world-solar-challenge-over-30-years-of-engineering-competition/
Go to the source link to view the article. You can view the picture content, updated content and better typesetting reading experience. If the link is broken, please click the button below to view the snapshot at that time.

World Solar Challenge: How Far In A Solar Car?

Solar power is a great source of renewable energy, but has always had its limitations. At best, there’s only 1,000 Watts/m2 available at the Earth’s surface on a sunny day, and the limited efficiency of solar panels cuts this down further. It’s such a low amount that solar panels on passenger cars have been limited to menial tasks such as battery tending and running low-power ventilation fans.

However, where some might see an impossibility, others see opportunity. The World Solar Challenge is a competition that has aimed to show the true potential of solar powered transport. Now 30 years since its inception, what used to be impossible is in fact achieved by multiple teams in under one tenth of the original time. To keep competitors on their toes, the rules have been evolving over time, always pushing the boundaries of what’s possible simply with sunlight. This isn’t mainstream transportation; this is an engineering challenge. How far can you go in a solar car? 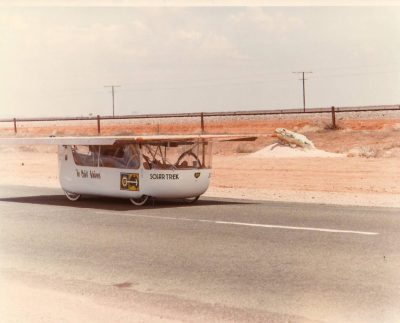 The Quiet Achiever, pictured here on its 1982 cross-continental journey, was the progenitor of the World Solar Challenge.

The progenitor of the event was one Hans Tholstrup, a Danish-born adventurer with a passion for sustainability and alternatives to fossil fuels. Working with Australian touring car legend Larry Perkins and his brother Garry, the trio built a solar-powered vehicle named The Quiet Achiever. In 1982, the lightweight vehicle travelled 2518 miles from Perth to Sydney in just 20 days, solely under power from the sun. The feat received much public attention, directly leading to the first running of the World Solar Challenge just 5 years later.

The inaugural competition was put together in 1987, in partnership with the South Australian Tourism Commission. It saw 13 competitors line up at the start, with 6 reaching the finish line. General Motors won the event with Sunraycer, completing a course from Darwin to Adelaide in just 44 hours 90 minutes, beating the second placed entry from Ford Australia by almost 23 hours.

Initially happening every three years, it switched to every two years from the 1999 running. Some years have seen over 50 teams join the race at the start line, though many drop out due to crashes or mechanical issues bringing their race to an end. Entrants come from diverse backgrounds all over the world to compete in the race. The last three decades of competition has seen entrants from automotive manufacturers, technology companies, universities and even high schools. Often, team sponsors come from high-tech industries involved in technology relevant to such applications.  Having a company onboard that can supply highly efficient solar panels or a lightweight, powerful motor can go a long way. 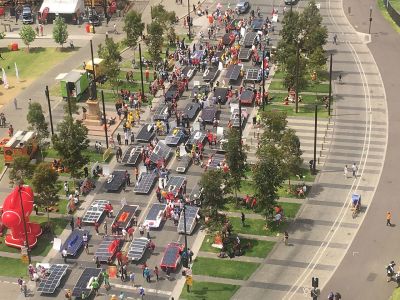 The race is run from Darwin in the Northern Territory, down to Adelaide in South Australia. The race finishes with all competitors forming up in Victoria Square for final celebrations.

Over the years, the race has evolved as new technologies have come to the fore. Regulations on maximum solar panel area have tightened as panels have become more efficient over the years. This helps to keep costs down, as the latest and greatest solar panels don’t come cheap. Other regulations focus on limiting onboard energy storage and ensuring a level playing field among competitors. Competition vehicles run on public roads and thus are required to abide by speed limits and road rules.

As average speeds have increased over the years, the rules have changed to place a focus on practicality as well, aiming to guide competitors towards designing vehicles that are closer to something usable on the street. The competition now features the Cruiser Class for multi-passenger vehicles, which are graded on factors such as ease of ingress and total number of passenger-kilometers racked up over the journey.

It’s All About Efficiency 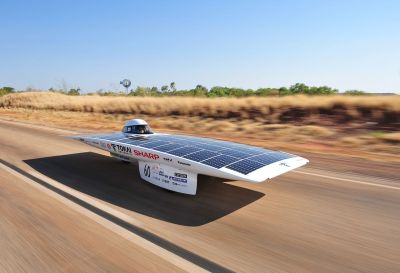 Much like traditional motorsports, the regulations of the World Solar Challenge have shaped the designs of competition vehicles. With limited energy available, efficiency is key in every aspect of design. A competitor that is able to capture the most energy and turn it into forward motion is best placed to bring home the win.

On the electrical side, the first concern is effectively capturing as much energy from the available sunlight as possible. Installing the highest-efficiency solar panels available is just one part of the equation. Teams will often tilt their solar panels to be perpendicular to the sun’s rays after driving ends at 5:00 PM, to make the most of the light available before sundown. To wring every last drop out of the cells, Maximum Power Point Tracking hardware is used to keep the solar cells in their optimum operating range. Motors and controllers are similarly designed with a focus on wasting as little power as possible when propelling the vehicle down the road. 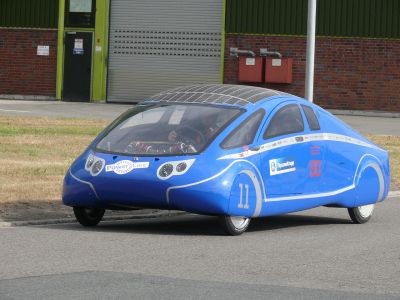 2013 saw the introduction of the Cruiser class, for solar vehicles intended to carry multiple passengers.

Perhaps the biggest impact on the external design of these vehicles is aerodynamics. Travelling at speeds of up to 130 km/h for hours at a time, drag plays a huge role in terms of energy efficiency. Reducing drag to the absolute minimum is key, with vehicles in the single-occupant Challenge class often featuring swooping, knife-blade teardrop designs. Wheels are often fitted with airfoil-shaped fairings to allow them to slice through the air. Historically, most designs had drivers laying in near-prone or recumbent positions to minimise their contribution to the profile of the car, however in recent years, seating positions have been changed to a more natural upright position to better resemble a road-going vehicle. Entries in the Cruiser class tend to have more compromised designs in this area, as they are necessarily bulkier and taller in order to carry multiple seated passengers. However, they still aim to minimise drag wherever possible, even if knife-edge streamlined designs aren’t practical in this class.

Mechanical efficiency is also key in order to build a competitive vehicle. Rolling resistance must be kept to a minimum, and specially designed tyres are used in pursuit of this goal. It’s also important to ensure bearings, chains and belts are properly chosen and maintained to avoid excessive losses in these areas. Attention to such small details can have a serious impact when travelling thousands of miles, particularly when such low amounts of energy are available.

Looking To The Future

As teams continue to build cars to best the existing challenges, the ruleset continues to shift to push the limits further. For 2021, regulations will again change to focus on driver comfort, dynamic stability of competition vehicles, and include new safety features like daytime running lamps. All of these changes have an effect on performance, from changing aerodynamics to adding a new power draw to the vehicles. However, it is this very challenge that forces teams to innovate and adapt their designs, creating better and more capable solar cars than ever before. While we don’t expect solar panels to become standard on passenger vehicles any time soon, barring a major change to our Sun, the event nonetheless serves as a useful showcase and proving ground for the very best in solar and electrical propulsion technologies.