source link: https://www.fullstackpython.com/blog/python-3-django-gunicorn-linux-mint-17.html
Go to the source link to view the article. You can view the picture content, updated content and better typesetting reading experience. If the link is broken, please click the button below to view the snapshot at that time.

Linux Mint 17.3 "Rosa" is December 2015 release of the polished and widely-used Linux distribution. This Mint release includes both Python 2.7 and 3.4 by default, but in this tutorial we will download and install the latest Python 3.5.1 version to run our Django application.

If you want to use a different Linux distribution such as Ubuntu instead of Mint, check out the tutorial for Ubuntu 16.04 "Xenial Xerus". If Mint is your desired development environment though, let's get started!

Our setup will use several system packages and code libraries to get up and running. Do not worry about installing these dependencies just yet, we will get to them as we progress through the tutorial. The tools and their current versions as of June 2016 are:

If you are on Mac OS X or Windows, my recommendation is to use virtualization software such as Parallels or VirtualBox with the Linux Mint Cinnamon desktop .iso.

We should see a desktop screen like this one when we boot up the operating system for the first time. 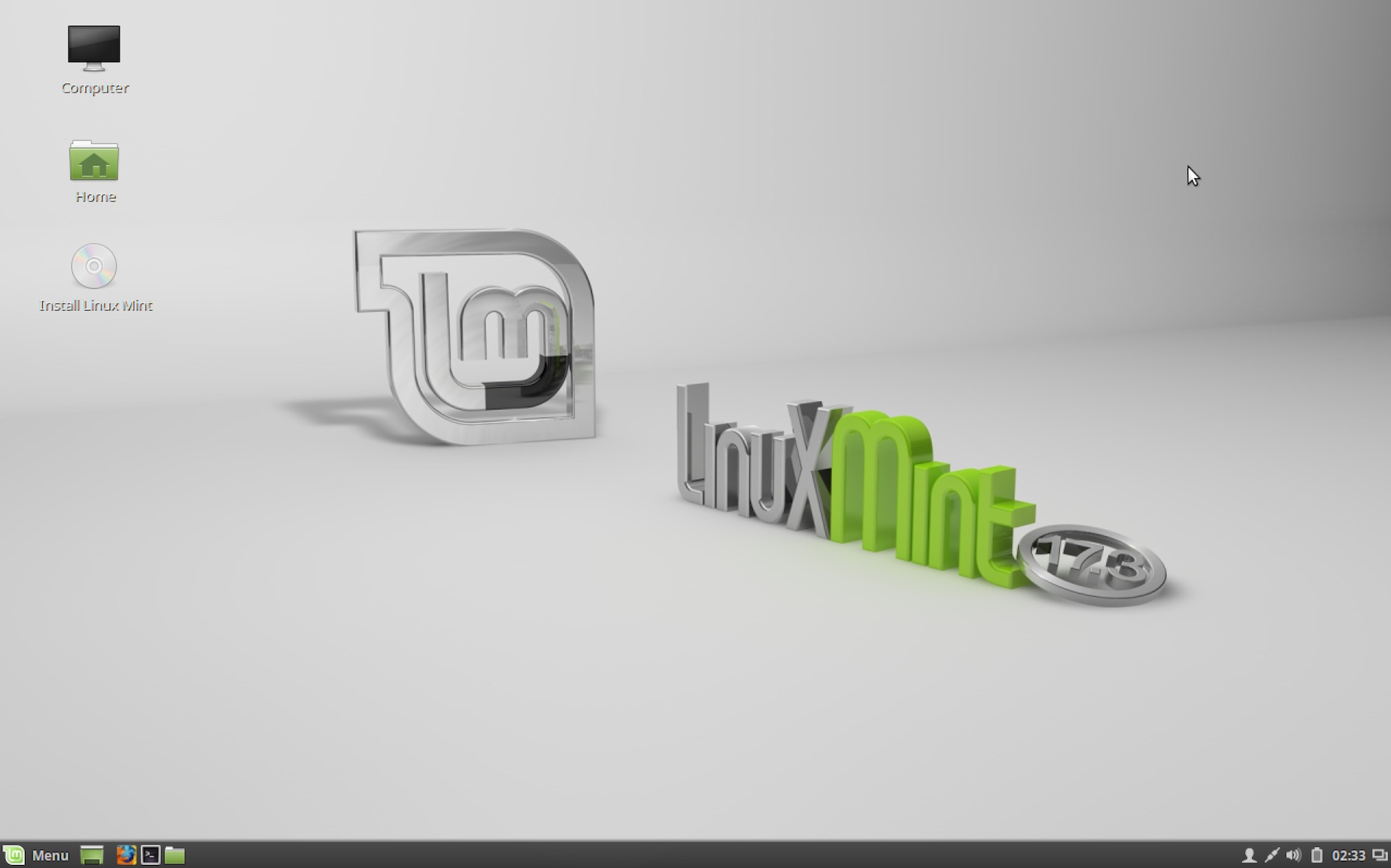 Open up terminal to proceed with the configuration.

We can see the Python version Linux Mint comes with, as well as where its executable is stored.

The output of those two commands should be (these are not commands to run):

We really want to use the latest Python release instead of the default 3.4 when starting a new Python project, so let's download and install 3.5.1 now.

Run these commands in the terminal to download Python 3.5.1 source code:

Linux Mint is not configured by default to build the Python source code. We need to update our system package lists and install several packages to make building the Python source code possible. If you have a password on your user account, enter it when prompted to allow the installation to proceed.

Once the packages are installed, we can configure and install Python from source.

Test that the installation worked properly by starting up the Python REPL:

If the REPL starts up properly with Python 3.5.1 in the output then we're good to go.

The basic system packages we need are now installed so we can proceed to our Python-specific dependencies.

Python 3.5 comes with the virtual environment and pip applications so we can use them to handle our application dependencies.

Create a directory to store virtual environments then create a virtualenv for our Django project.

Our virtual environment is properly activated when we see (djangoproj) prepended to our prompt.

Our virtualenv with Python 3.5.1 is activated so we can install whatever dependencies we want, such as Django and Gunicorn. Our default python command is also set to use the Python 3.5.1 installation instead of the Python 2.7 version that comes with Linux Mint.

Now we can install Django and Green Unicorn into our virtual environment.

If there are no errors in the pip output then that is a good sign we can proceed.

Create a new Django project named djangoproj, or whatever you want to name your project. Change into the directory for the new project.

We can run Django using the development server with the python manage.py runserver command. However, start Django up with Gunicorn instead. 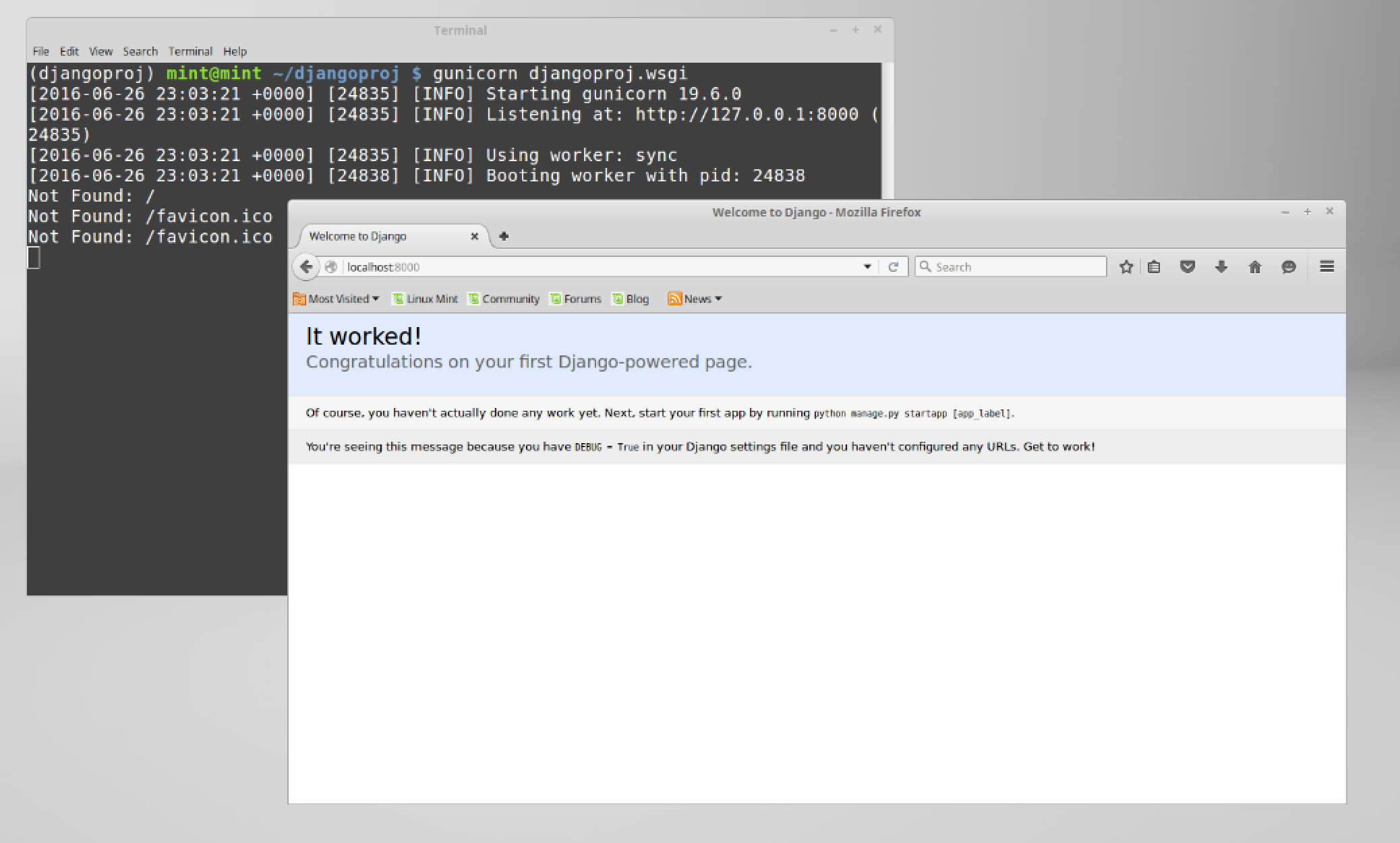 Now you're ready for Django development!

Those are the first few steps for beginning development with Django and Gunicorn on Linux Mint 17.3 "Rosa". If you need an even more in-depth walkthrough for deploying your Python web application to a production environment, check out the Full Stack Python Guide to Deployments book.

To figure out what to do next for your Python project, read the topics found on the table of contents page.

See something wrong in this post? Fork this page's source on GitHub and submit a pull request.