source link: https://9to5mac.com/2020/12/18/facebook-now-warning-users-about-impacts-on-ads-due-to-new-ios-14-privacy-features/?utm_campaign=Feed%3A+9To5Mac-MacAllDay+%289+to+5+Mac+-+Apple+Intelligence%29
Go to the source link to view the article. You can view the picture content, updated content and better typesetting reading experience. If the link is broken, please click the button below to view the snapshot at that time. 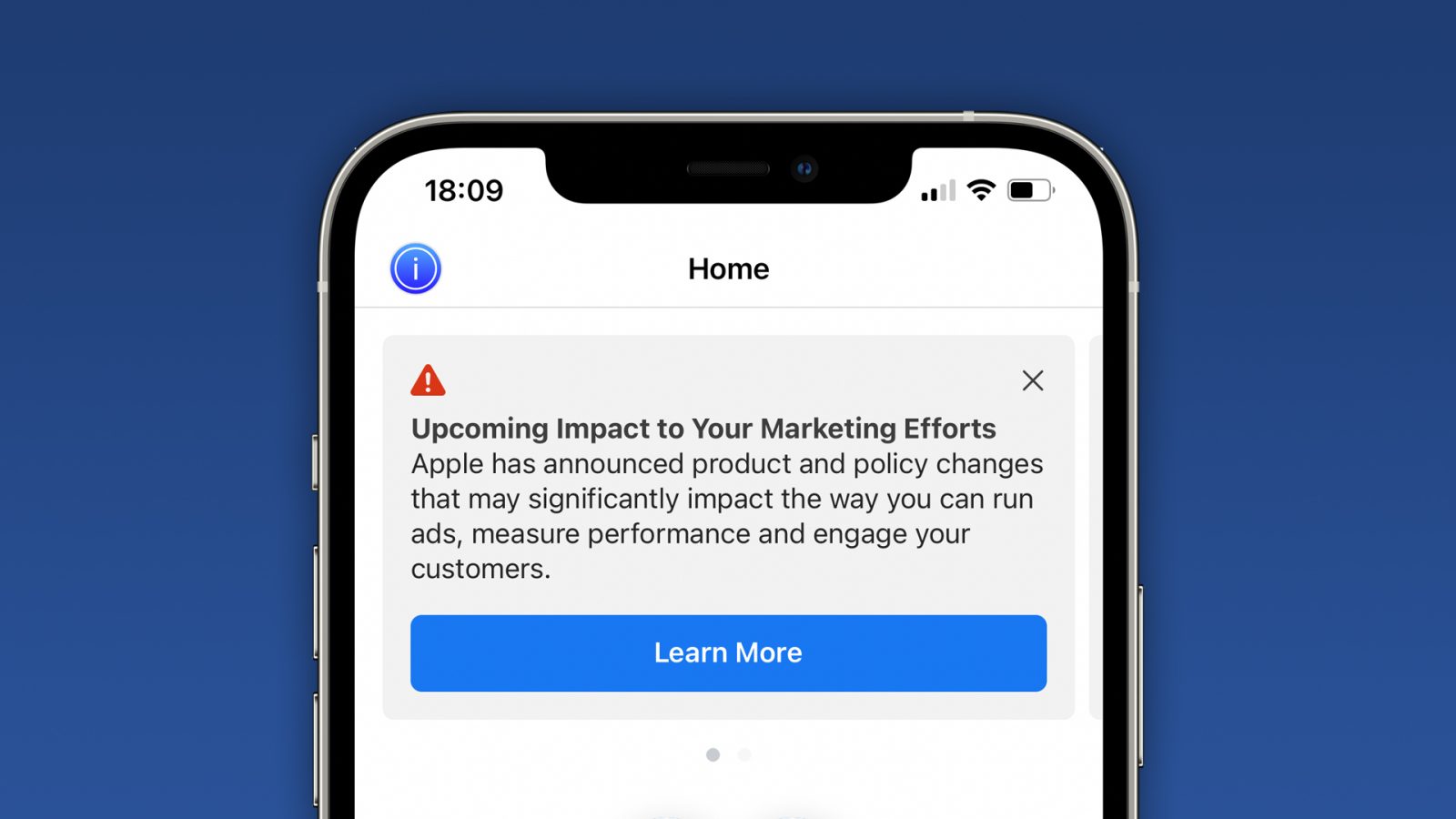 As we covered here this week, Facebook criticized Apple with a full-page ad in US newspapers due to the new App Store guidelines, which will force apps to offer an option for users not to be tracked across the web. After Apple responded to Facebook, the company started warning iOS users in its official apps about the upcoming changes in advertisements.

As noted by some users today and now confirmed by 9to5Mac, Facebook is now promoting banners on some of its iOS apps, once again criticizing Apple for the changes in App Store privacy guidelines.

When accessing apps like Facebook Business Suite and Facebook Ads in iOS, users will see a highlighted message at the top of the screen about an “Upcoming impact to your marketing efforts.”

Apple has announced product and policy changes that may significantly impact the way you can run ads, measure performance, and engage customers.

By tapping the Learn More button, the app opens an article written by Facebook in which the company says Apple’s policies announced at WWDC 2020 with iOS 14 will “harm the growth of business and the free internet.” Facebook refers both to the new App Store privacy labels and also an option in iOS 14 that prevents apps from tracking users.

The fact that Facebook is now showing these messages in its iOS apps criticizing Apple demonstrates that the company is trying to get popular appeal to change Apple’s mind about its new App Store privacy rules. That’s because Facebook is one of the companies that will be most impacted by Apple’s new privacy policies as its social networks rely heavily on ads and personal data from users.

In a statement to 9to5Mac, Apple said it doesn’t want to force Facebook to change its business model, but the company expects Facebook to be more transparent about how it collects data from users and let them choose whether or not to offer such data.

In a related note, Facebook also announced a public webinar for January 7, 2021, that will discuss why the company disagrees “with Apple’s approach to their iOS 14 policy changes under the banner of increased privacy for people.” The webinar will bring Facebook executives to discuss the new iOS 14 privacy policies and the impact they will have on users and professionals working with Facebook.

Last night, Apple CEO Tim Cook argued on Twitter that “users should have the choice over the data that is being collected about them” in another direct response to Facebook, suggesting that the battle between the two companies is just beginning.

We believe users should have the choice over the data that is being collected about them and how it’s used. Facebook can continue to track users across apps and websites as before, App Tracking Transparency in iOS 14 will just require that they ask for your permission first. pic.twitter.com/UnnAONZ61I

You’re reading 9to5Mac — experts who break news about Apple and its surrounding ecosystem, day after day. Be sure to check out our homepage for all the latest news, and follow 9to5Mac on Twitter, Facebook, and LinkedIn to stay in the loop. Don’t know where to start? Check out our exclusive stories, reviews, how-tos, and subscribe to our YouTube channel

Check out 9to5Mac on YouTube for more Apple news: