source link: https://www.allaboutcircuits.com/news/snapdragon-888-qualcomms-first-high-end-chip-with-build-in-modem/
Go to the source link to view the article. You can view the picture content, updated content and better typesetting reading experience. If the link is broken, please click the button below to view the snapshot at that time.

During the annual Snapdragon Tech Summit in early December, Qualcomm introduced its latest flagship product, the Snapdragon 888 5G mobile platform, which Qualcomm says will set the benchmark for flagship smartphones in the year to come.

A 5G-ready mobile platform, Snapdragon 888 uses a third-generation 5G modem directly integrated into the chip’s circuit and supports both frequencies below 6 GHz and mmWave with carrier aggregation. It also has a maximum download speed of 7.5 gigabits per second and a maximum transmission speed of 3 gigabits per second.

Snapdragon 888 is fabricated using Samsung’s N5 process and is Qualcomm’s first high-end system chip with a modem built into the circuitry. This modem is a third-generation Snapdragon X60 5G modem, initially released in February 2020, that provides support for standalone and non-standalone network technologies and Dynamic Spectrum Sharing (DSS) in addition to mmWave and sub-6 GHz frequencies.

The Snapdragon 888 circuit itself contains eight processor cores that are separated into three different groups. 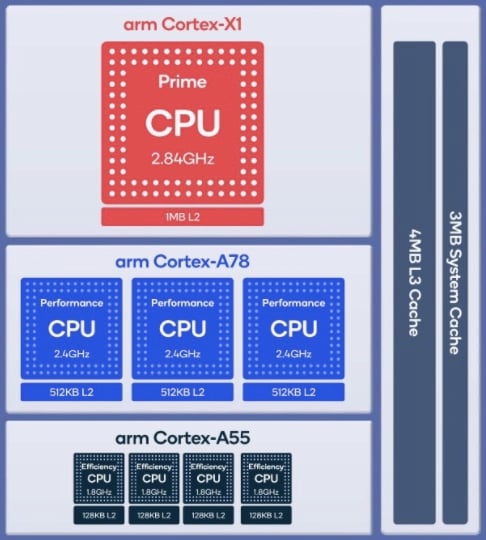 The Qualcomm KryoTM 680 performance core is the first cluster, generating a 25 percent increase in overall CPU performance according to the company. This core is based on Arm's next-generation Cortex-X1 core and operates at a clock speed of 2.84 GHz. It also includes 1024 KB of L2 cache.

Arm says that the X1 core offers a 30 percent IPC performance improvement over the Cortex-A77 core that Qualcomm used in the Snapdragon 865.

The First Commercial Chip to Use the Arm Cortex-X1

What’s interesting about Snapdragon 888 is that it’s the first commercial chip to make use of Arm's Cortex-X1 as part of the Kryo 680 cluster.

The Cortex-X1-based Kryo 680 cluster, which clocked up to 2.84 GHz, is the chip’s main engine. That said, it can handle the intensive app threads that come with heavy 5G and artificial intelligence (AI) applications. According to Arm, Cortex-X1 typically has 64 KB of L1 data and 64 KB of L1 instruction cache, giving it an edge over rivals when carrying out tasks like JavaScript interpretation.

Other features of the Snapdragon 888 include 4 megabits of L3 cache, a system cache of 3 megabits, a type-1 hypervisor that can isolate data between apps and multiple operating systems on the same device, and support for Bluetooth 5.2 with two antennas.