source link: https://www.i-programmer.info/news/89-net/14222-net-on-qa.html
Go to the source link to view the article. You can view the picture content, updated content and better typesetting reading experience. If the link is broken, please click the button below to view the snapshot at that time.

Microsoft Q&A is a global, community-driven platform for timely, high-quality technical answers. Is StackOverflow in trouble?

Not quite because this is an effort just focused on Microsoft products.The newest addition to the platform is the section on .NET and its sibling technologies such as ASP.NET, C#, F#, Xamarin, Windows Forms and so on. Specifically it is divided into three distinct categories - Runtime; App & Web Development; and Languages, Data and more.

As described in Keep Up To Date With Microsoft's .NET Live TV a new resource in which Microsoft tries to unify the discovery and scheduling of all .NET and Visual Studio live streams, Q&A .NET is another attempt to bring together all the .NET products under one portal, meaning that Q&A will soon supersede all the old forums around .NET topics including MSDN, ASP.NET, IIS.NET, and Xamarin.

Just like StackOverflow, you can ask questions, tag them with labels, comment, upvote/like answers, accept answers and earn reputation points. There's no button for downvoting though - on purpose?

The forum's design is like that of StackOverflow. A section with related questions can be found on the right side of the question at hand, and there's an autocomplete feature that means that as you type your question's title, a drop-down box gets filled with related questions. One nice feature of Q&A that SO lacks, is that of the threaded comments, where replies to comments get nested, so that you can easily keep track of the conversation. For the full set of features check the Top Q&A features. 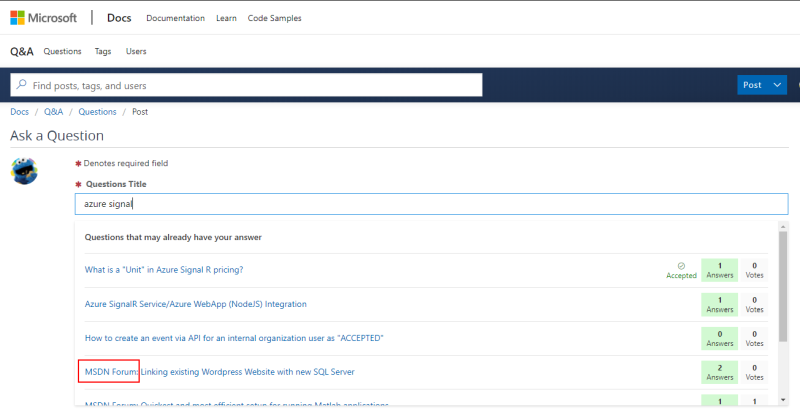 On the other hand, a third party feature that's missing from Q&A but present in SO, is having a service like Stackprinter that lets you easily print/store/archive the question with all its answers and comments expanded.

So the forum has opened and it begs the question who will prevail in this .NET fight for developers preference? StackOverflow or .NET Q&A?

That depends on many factors and whether Q&A can overcome some of the issues that plague SO. such as onboarding beginners and not driving them away with impolite and elitist behavior, controlling the quality of the questions asked by editing them to make them easier to understand and not closing them down as off-topic, or getting downvoted for no apparent reason. The current SO moderation system discourages quality content since moderators often downvote or close questions because they do not possess the proper domain specific knowledge to understand the question asked.

The stats do not lie. As the SO time series graph demonstrates, the number of active experts, that is the number of those who have posted more than one upvoted answer, has been steadily declining. What does this indicate? That there are lots of people who do not answer questions any longer because of several reasons. Either the quality of the questions asked has been declining, something that drives away contributors, or they are engaging in elite behavior and snubbing questioners and perhaps its simply that the pros have been abandoning the platform for something else.

The quality of the posted questions on SO is a hotly debated subject and there have been attempts to quantify the notion of quality and to epistemologically find ways to address its lack thereof. There are even jokes about it the web, such as this "This Question Does Not Exist" that generates questions by a neural network prompting you to if possible tell it apart from a user question with the purpose to mock the quality of the questions circulating around SO. See this example.

I wonder how Microsoft is going to approach this problem. One way they're going to tackle it is by throwing a dedicated support team of MSFT employees behind moderation as well as having MVPs and Product Managers answering questions. Imagine someone on the C# team answering your question. Well something like that happens on SO as well. For example, in the past Eric Lippert, a member of the C# compiler team, was in the habit of answering relevant questions. But it's one thing doing it in ad-hoc fashion and another to make it an organized policy. It comes down to the difference that on Q&A they regard you as a Microsoft customer and not as just a random user. At least that's the intention.

Another factor that I see as playing a role in the prevalence of one over the other is, since most developers are akin to something like professional Googlers, preferring to google for an answer rather than use the custom search facilities of SO, Google's SEO visibility and promotion are going to be important.

Anyway, we have to keep in mind that for finding success through these tools is the ability to formulate your questions the right way and having done your homework.

StackOverflow, despite its disadvantages is still considered the premium source for finding answer to your tech troubles. After all what's the alternative?

Has the time come for a new StackOverflow?

Keep Up To Date With Microsoft's .NET Live TV