GitHub - textmate/textmate: TextMate is a graphical text editor for macOS 10.10...

source link: https://github.com/textmate/textmate
Go to the source link to view the article. You can view the picture content, updated content and better typesetting reading experience. If the link is broken, please click the button below to view the snapshot at that time.

You can use the TextMate mailing list or #textmate IRC channel on freenode.net for questions, comments, and bug reports.

Before you submit a bug report please read the writing bug reports instructions. 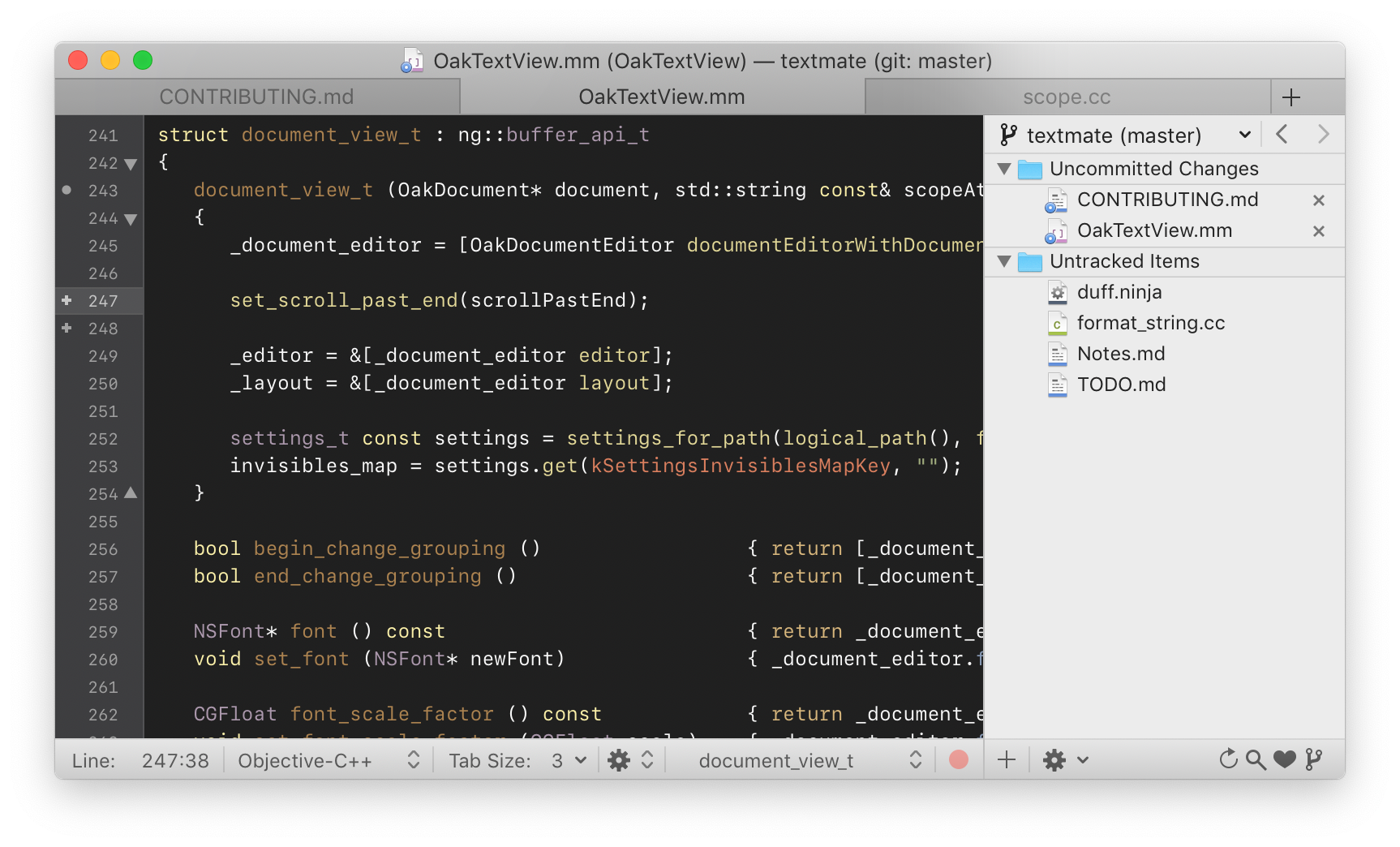 To bootstrap the build you need to run ./configure (in the root of the source tree). You can set a few (environment) variables read by this script that change the generated build file:

In the simplest case (assuming Homebrew is installed) you would run:

If you're using MacPorts then instead run this line to install dependencies:

Unless you’re using Homebrew then Cap’n Proto must be manually installed. Feel free to submit a PR to update configure.

If port fails with a build error then likely you need to agree (system-wide) to Apple’s Xcode license:

Building TextMate has the following dependencies:

In practice hg (mercurial) is only required for the SCM library’s tests so you can skip this dependency if you don’t mind a failing test.

If you want to avoid the libressl linker warnings about being built for different deployment target then run brew edit libressl and make the following change:

Building from within TextMate

You should install the Ninja bundle which can be installed via Preferences → Bundles.

After this you can press ⌘B to build from within TextMate. In case you haven't already you also need to set up the PATH variable either in Preferences → Variables or ~/.tm_properties so it can find ninja and related tools; an example could be $PATH:/opt/local/bin.

The default target is TextMate/run. This will relaunch TextMate but when called from within TextMate, a dialog will appear before the current instance is killed. As there is full session restore, it is safe to relaunch even with unsaved changes.

If the current file is a test file then the target to build is changed to build the library to which the test belongs (this is done by setting TM_NINJA_TARGET in the .tm_properties file found in the root of the source tree).

Similarly, if the current file belongs to an application target (other than TextMate.app) then TM_NINJA_TARGET is set to build and run this application.

For the TextMate.app application there are two symbolic build targets:

To clean everything run:

The source for TextMate is released under the GNU General Public License as published by the Free Software Foundation, either version 3 of the License, or (at your option) any later version.

TextMate is a trademark of Allan Odgaard.