source link: https://www.tuicool.com/articles/RRRRziA
Go to the source link to view the article. You can view the picture content, updated content and better typesetting reading experience. If the link is broken, please click the button below to view the snapshot at that time.

Shortly after the release of Helidon 1.0 , Oracle announced Helidon support for GraalVM that convert Helidon applications to native executable code via the native-image utility.

Originally named J4C (Java for Cloud) and first introduced in September 2018, Helidon was designed to be simple and fast, and is comprised of two versions: Helidon SE and Helidon MP . Helidon SE features three core APIs -- a web server, configuration, and security -- for building microservices-based applications. An application server is not required. Helidon MP MicroProfile 1.2 for building microservices-based applications with the supported MicroProfile APIs .

GraalVM , created by Oracle Labs , is a polyglot virtual machine and platform that may be integrated into Helidon applications. GraalVM is comprised of Graal , a just-in-time compiler written in Java, SubstrateVM , a framework that allows ahead-of-time compilation of Java applications into executable images, and Truffle , an open-source toolkit and API for building language interpreters.

Only Helidon SE applications may take advantage of GraalVM due to the use of reflection in CDI 2.0 ( JSR 365 ), a core MicroProfile API. Therefore, Oracle Labs decided not to include GraalVM support for Helidon MP.

The Helidon SE quickstart example includes a Maven goal for the GraalVM native-image utility and Docker files to convert the application to native executable code. This example has been tested with Helidon 1.1.2 and GraalVM 19.1.1, the latest versions of each.

An installation of GraalVM is not required to use the Docker profile:

As shown below, the web server is started with native executable file, helidon-quickstart-se , generated by GraalVM. 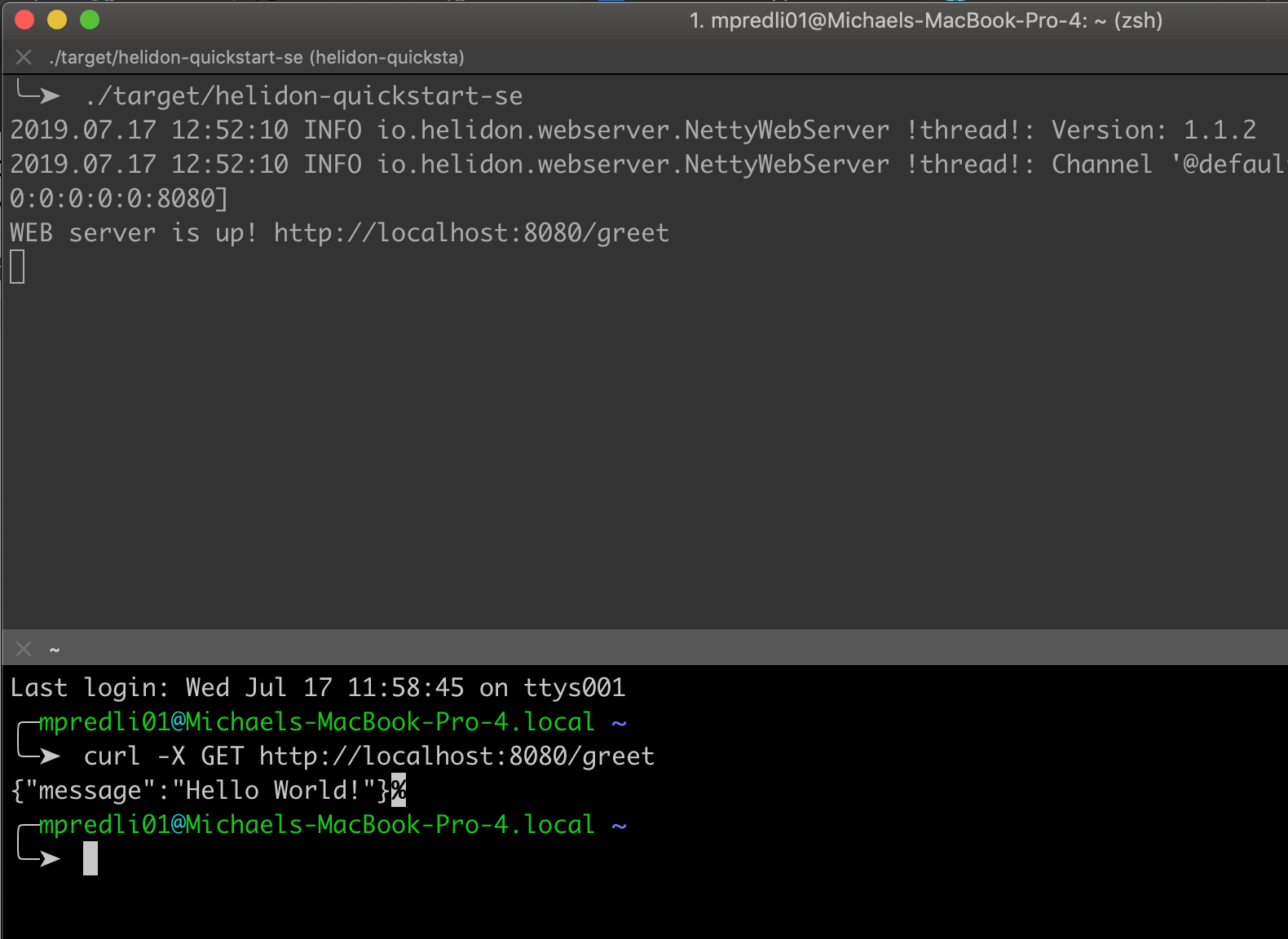 Kornilov spoke to InfoQ about Helidon and GraalVM including more details regarding long-running vs. short running applications:

InfoQ: Please explain why performance in long-running applications is better with a traditional JVM over a native executable built with GraalVM.

Native images are perfect for short-running applications like functions where start time is critical. For long-running services, where start-up time is not so critical, JVM with runtime optimization is better. Also, don't be fooled with start-up times. My sample application starts up 1½-2 seconds slower on my notebook than the same application compiled as a native image. However, the difference is negligible when comparing it to Kubernetes pod start-up time, for example.

Kornilov:MicroProfile 2.2 support is already in master and we are making some final tuning adjustments before the release. MicroProfile 3.0 has some backwards incompatible changes, so we will possibly need to release a new major version of Helidon to support it. We already have OpenAPI 1.3 support and support for HeathCheck 2.0 is almost complete as well. Support for Metrics 2.0 requires more work and we are evaluating and estimating it now. I expect that we will add MicroProfile 3.0 support before the end of 2019.

InfoQ: What's on the horizon for Helidon?

Kornilov:There are many things we are working on. HTTP multipart and full HTTP/2 support are coming soon. We are also working on Helidon DB Client which will allow using JDBC databases the reactive way in Helidon SE.

We are also improving JPA and JTA support in Helidon MP and recently added Universal Connection Pool (UCP) support which includes cool continuity features. We just started working on reactive messaging and eventing support, but it's too early to talk about that now. By the way, there are several Helidon sessions accepted for Oracle Open World and CodeOne. If you are attending, don't miss these sessions as we'll be providing more details about Helidon features and future plans.