source link: https://finance.yahoo.com/video/google-ceo-doubles-down-job-220503347.html
Go to the source link to view the article. You can view the picture content, updated content and better typesetting reading experience. If the link is broken, please click the button below to view the snapshot at that time. 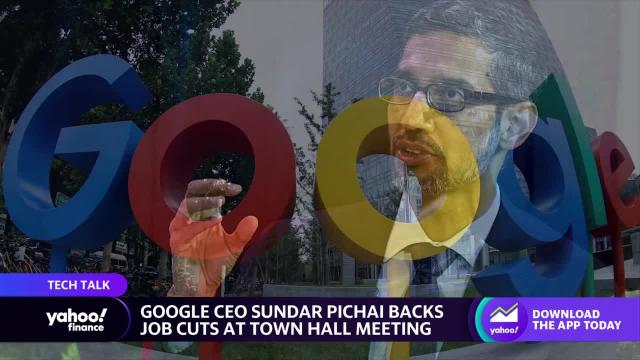 SEANA SMITH: Antitrust lawsuits are not the only headache that Google is dealing with this week. Following the tech giant's decision to lay off 12,000 employees, things got animated at a town hall meeting with CEO Sundar Pichai. Our own Allie Garfinkle is here to tell us more. And Allie, there's lots of unhappy Google employees right now.

ALLIE GARFINKLE: There are, Seana. I'd go so far to say that this didn't just get animated. It got to be pretty intense. This town hall really centered on employees demanding transparency for how these decisions were made. A lot of employees were laid off who weren't expecting it, who saw themselves or their laid off colleagues as high performers. And Sundar Pichai sat down and had a message for everyone. He said nothing was random. What it actually revealed is he actually gave some insight into the process.

And but it appears that it was incredibly methodical. Even though this affected 12,000 employees, we know the process was exhaustive. At the town hall, he actually said that 750 senior leaders were involved in the decision-making process and that it took multiple weeks. That said, these layoffs have possibly been in talks behind the scenes for a long time. These layoffs, one expert told me, are some of the most predictable that we've seen so far in big tech. Look back to November, for instance. Activist investor TCI was calling on Google to start rightsizing even then.

And what it called for was these kind of cuts. It was calling for aggressive action. And that is on top of the fact that Google famously pays some of the highest salaries in Silicon Valley. The median employee pay at Google Alphabet in 2021, I believe, was $296,000 a year, which is more than Meta and a lot of its competitors. And Google is in a new moment. Alphabet's in a new moment. It's looking to compete for new AI driven revenues. And this moment of we're going to get leaner has been coming. It was methodical is what Pichai said. That said, what this town hall has showed us, if anything, is that Google still has some work to do when it comes to saving face with its employees.

SEANA SMITH: It certainly does. Many are very upset right now. Allie Garfinkle, thanks so much for the latest there.