source link: https://techxplore.com/news/2022-11-massive-traffic-pits-machine-phantom.html
Go to the source link to view the article. You can view the picture content, updated content and better typesetting reading experience. If the link is broken, please click the button below to view the snapshot at that time. 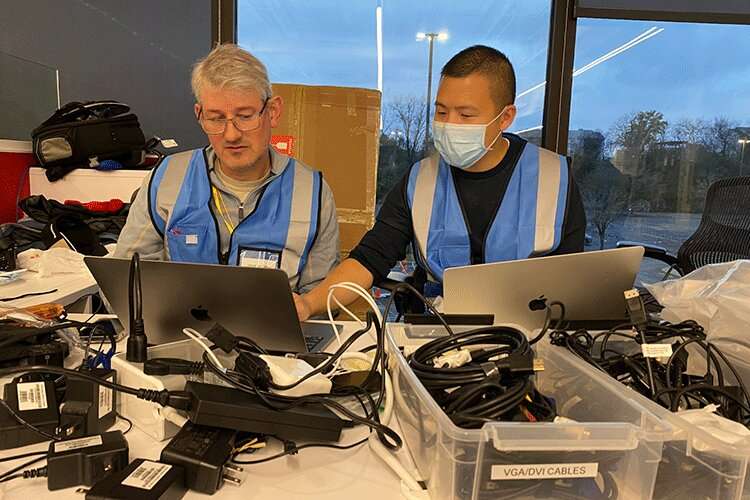 CIRCLES Co-PIs Jonathan Sprinkle and Jonathan Lee push software to the vehicles for the test the next day. Credit: Alexandre Bayen

Many traffic jams are caused by human behavior: a slight tap on the brakes can ripple through a line of cars, triggering a slowdown—or complete gridlock—for no apparent reason.

But in a massive traffic experiment that occurred outside of Nashville last week, scientists tested whether introducing just a few AI-equipped vehicles to the road can help ease these "phantom" jams and reduce fuel consumption for everyone. The answer seems to be yes.

Over the course of five days, researchers conducted one of the largest traffic experiments of its kind in the world, deploying a fleet of 100 Nissan Rogue, Toyota RAV4 and Cadillac XT5 vehicles onto a busy stretch of Nashville's I-24 during the morning commute. Each vehicle was equipped with an AI-powered cruise control system designed to automatically adjust the speed of the vehicle to improve the overall flow of traffic—essentially turning each car into its own "robot traffic manager."

"Driving is very intuitive. If there's a gap in front of you, you accelerate. If someone brakes, you slow down. But it turns out that this very normal reaction can lead to stop-and-go traffic and energy inefficiency," said Alexandre Bayen, associate provost and Liao-Cho Professor of Engineering at the University of California, Berkeley. "That's precisely what AI technology is able to fix—it can direct the vehicle to things that are not intuitive to humans, but are overall more efficient."

Bayen is principal investigator of the CIRCLES Consortium, a multi-university research collaboration dedicated to using machine learning to improve traffic flow and increase energy efficiency. Last week's experiment, which was carried out in coordination with Nissan North America, Toyota, General Motors and the Tennessee Department of Transportation, was the first time the AI technology pioneered by CIRCLES has been tested at this scale.

In a five-day field trial that occurred outside of Nashville last week, researchers deployed a fleet of 100 semi-autonomous vehicles to test whether a new AI-powered cruise control system can help smooth the flow of traffic and improve fuel economy. Credit: UC Berkeley video by Alan Toth and Roxanne Makasdjian

"By conducting the experiment at this large of a scale, we hope to show that our results can be reproduced at the societal level," said CIRCLES co-PI Maria Laura Delle Monache, an assistant professor of civil and environmental engineering at UC Berkeley. "Even when only a few vehicles behave differently, the overall system can be impacted, making it better for everyone on the road and not only for those with AI-equipped vehicles."

To achieve this tremendous undertaking, more than 50 CIRCLES researchers from around the world gathered in a large "command center" in a converted office space in Antioch, Tenn. Each morning of the experiment, which ran from Nov. 14 to Nov. 18, trained drivers took the AI-powered vehicles on the recently opened I-24 MOTION testbed, a stretch of the interstate that has been equipped with 300 4K digital sensors to monitor traffic.

As the drivers traversed their route, researchers collected traffic data from both the vehicles and the I-24 MOTION traffic monitoring system. On Nov. 16 alone, the system recorded a total of 143,010 miles driven and 3,780 hours of driving. The I-24 MOTION system, combined with vehicle energy models developed in the CIRCLES project, will provide an estimation of the fuel consumption of the whole traffic flow during those hours.

"Our preliminary results suggest that, even with a small proportion of these vehicles on the road, we can effectively change the overall behavior of traffic. Since this is the first time this has been done at this scale, it will take several months to mine the data collected and precisely quantify the energy impact of the field test," Bayen said. "The game changer here was the coordination—the fact that the vehicles leverage each other's presence and can react preemptively to downstream traffic conditions."

The new AI technology goes a step beyond the adaptive cruise control systems that are already on the market. In addition to adjusting the speed of the vehicle in response to local conditions, the technology also incorporates information about traffic conditions and adjusts the speed to help smooth the overall flow of traffic.

The experiment also demonstrated a new feature developed by the CIRCLES team: the ability to simultaneously push collaborative algorithms to different car platforms (Nissan, GM and Toyota). The team is in the process of planning how the technology can be deployed in California.

"Stop-and-go traffic creates a lot of problems," said Jonathan Lee, chief engineer and co-PI of CIRCLES and a staff member at UC Berkeley's Institute of Transportation Studies. "Constantly starting and stopping wastes a lot of energy. It's also uncomfortable for drivers and passengers, and can increase the likelihood of collisions. By smoothing out that flow, we hope to make driving not only safer and more energy efficient, but more comfortable as well."

A timelapse video of the parking lot outside experiment headquarters as AI-equipped vehicles leave to drive their routes on I-24 and then return. Credit: CIRCLES video courtesy Jonathan Sprinkle

From traffic monitoring to traffic smoothing

For more than a decade, Bayen and other members of the CIRCLES consortium have been applying the latest technologies to help improve transportation. In 2008, Bayen and Daniel Work, who was a UC Berkeley graduate student at the time, led the Mobile Millennium project, one of the first demonstrations of how GPS-enabled smartphones can provide real-time information about traffic conditions. In the experiment, the UC Berkeley-based team managed a fleet of 100 vehicles driving a 10-mile route through the San Francisco Bay area, while Nokia phones transmitted speed information from each vehicle to a central server.

Now that smartphones are ubiquitous and real-time traffic information is available at the click of a button, Bayen is excited to show how machine learning can be used to not only monitor traffic but also improve conditions on the road.

"The beauty of the techniques we're using is that they can take human data, learn from it, and then apply it to make things better," Bayen said.

In 2016, a team of researchers including Work and Delle Monache conducted a real-world experiment showing the profound impact smart vehicles could have on the flow of traffic.

In the experiment, 20 cars were driven on a closed, circular track. When all the cars were driven by humans, traffic "waves" consistently emerged, mimicking the stop-and-go pattern that occurs on roadways. But adding just one smart vehicle to the mix smoothed the human-caused waves, leading to a 40% fuel savings overall.

After securing a $3.5 million grant from the U.S. Department of Energy (DOE) in 2020, the CIRCLES team began preparations to repeat the experiment on a much larger scale, this time integrating the AI-equipped vehicles into the normal flow of highway traffic.

"Cars are already being sold with driver assistance systems, but we don't yet fully understand how this technology is impacting traffic," Delle Monache said. "With this experiment, we hope to better understand the impact of these systems, and also make sure that whatever the impact is, it benefits traffic overall and not just individual vehicles."

As part of the CIRCLES consortium, UC Berkeley researchers have taken the lead in developing the machine learning algorithms that govern how fast AI-powered vehicles should go. These algorithms, also called "speed planners" and "controllers," use information about overall traffic conditions and the vehicle's immediate surroundings to determine the best speed for improving traffic flow.

"The idea is that, if a traffic jam or bottleneck appears ahead on the road, we want to try to adjust the speed of the vehicle so that it doesn't contribute to the congestion," said Hossein Nick Zinat Matin, a postdoctoral researcher in Delle Monache's group at UC Berkeley. "This is a complex mathematical problem."

To develop these speed planners, the team must first must define the mathematical models that describe how traffic behaves. In general, Matin says, the flow of traffic can be modeled using equations similar to those that govern the flow of fluids, but the human element of driving complicates things.

"Drivers are not just particles. They think, and they have specific behaviors," Matin said. "That's what makes this research area really interesting."

Capturing this human aspect of traffic flow is also one of the reasons last week's experiment was so important, Lee says. The team regularly runs computerized traffic simulations to train the machine learning algorithms to smooth stop-and-go behavior and minimize energy consumption. Data from the experiment will be critical to refining these simulations and algorithms for real-world driving.

Testing the software in the field is also important to ensure that the AI-powered vehicles don't behave in ways that might be considered "socially unacceptable" to humans. For instance, vehicles may smooth traffic by maintaining a slow, steady speed, rather than constantly accelerating and braking. However, slow driving may open large gaps in traffic, which could anger other drivers, or allow other cars to cut in.

"We want to train our vehicles to drive in a specific way that is not human-like, but also not completely socially unacceptable," Lee said. "A big focus for us during the test week was to make daily tweaks to our controllers based on feedback from our drivers."

In addition to training the algorithms to follow the rules of the road, the software also must be compatible with the hardware and capabilities of actual vehicles. While a simulated car can jump from zero to 60 mph in an instant, even the most advanced sports cars can't achieve that level of acceleration.

"All my previous work had been in developing algorithms that just ran on computers, so taking into account all the hardware limitations and considerations was an interesting paradigm shift for me," said Arwa AlAnqary, a second-year Ph.D. student in Bayen's group at UC Berkeley.

Bayen, Delle Monache, Lee, Matin and AlAnqary were among 18 UC Berkeley students, post-docs, staff, and faculty who traveled to Nashville last week to help conduct the experiment. As drivers took their vehicles on the interstate and activated the AI-powered cruise control system, the team was on hand to analyze the data coming in and address any last-minute technical glitches that arose during the experiment.

"Our vision is that eventually, this technology will be deployed in many, if not all, vehicles, and we are working on ways to make it scalable to the public," Lee said.