source link: https://florentcrivello.com/co-founding-considered-harmful/
Go to the source link to view the article. You can view the picture content, updated content and better typesetting reading experience. If the link is broken, please click the button below to view the snapshot at that time.

“Hell is other people.”
Sartre

I’ve come to view the idea that you absolutely need a co-founder as one of the most harmful memes in Silicon Valley. It’s probably killed more companies than any other misconceptions out there.

Instead, I think one should go solo if they can, and only get a co-founder if they are absolutely sure that they found the perfect one.

This is supported by findings that solo founders are twice as likely(!) to be successful than co-founders. 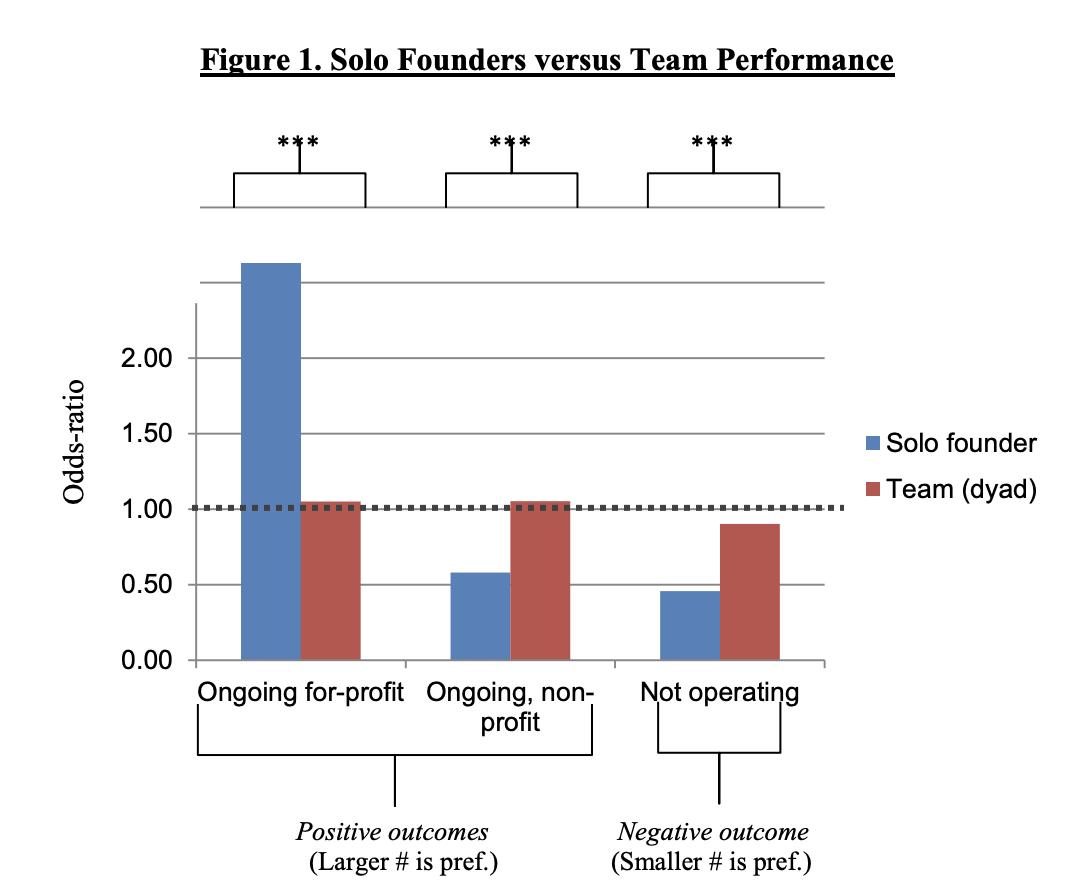 And this is certainly congruent with my experience: almost all co-founders I know have broken up, often endangering the company.

This includes the relationships I would have deemed most solid — people who’d known each other for 5+ years, finished each other’s sentences, had worked together before, etc… And now aren’t even on talking terms.

“But solo is so lonely!”

One of the main reasons folks recommend you not to go solo is that it’s too hard on you, psychologically.

I had a co-founder for a few weeks when I started Teamflow, but have been solo for the rest of the journey. I do have a team I love, but do agree that it can be lonely — there is merit in having a co-founder who is just as financially, emotionally and reputationally invested, riding with you on the rollercoaster.

But the grass is always greener. Solo founders often fantasize about having “another them,” a sort of soulmate in the trenches with them.

Reality often falls short. Instead of a soulmate, you might find yourself trapped with someone who greatly adds to your stress instead of subtracting from it.

And there are ways to mitigate the loneliness: you can open up to your friends or partner — though you obviously don’t want to overdo that — or you can get a therapist or executive coach.

Another approach is to over-incentivize your first few hires, giving them 2-4% instead of 1-2%. Then these people have the same level of buy-in as a co-founder would.

“But you need a thought partner”

“The first principle is that you must not fool yourself, and you are the easiest person to fool.”
– Richard Feynman

Going solo can also make it harder to think clearly. This aggravates the other big cause of startup failure: lack of product-market fit.

Being solo makes finding PMF harder in two ways: you lack a thought partner, and, most importantly, you run a bigger risk of being in denial.

This is supported by the data. The startup genome project finds that:

1. Successful startups have to pivot at least once.

Your first idea rarely works out.

As Clayton Christensen said, “successful companies don’t succeed because they have the right strategy at the beginning; but rather, because they have money left over after the original strategy fails, so that they can pivot and try another approach.”

2. Solo founders are a lot less likely to pivot than co-founders. 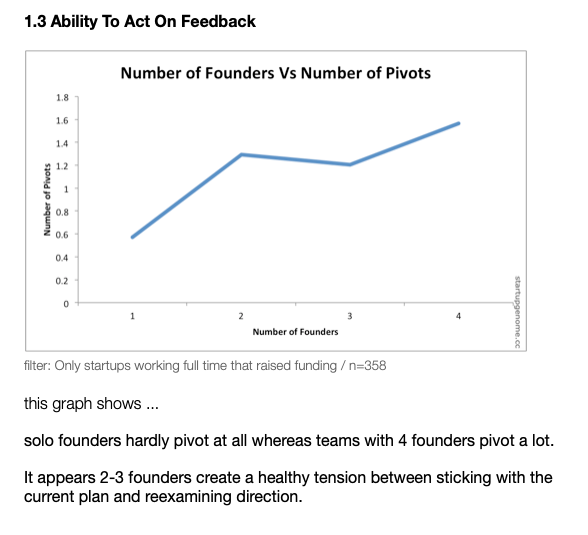 But there are ways to mitigate this too. I’ve found it critical to set aside at least three hours every Friday to think about my startup, with no interruptions (credit to Mathilde Collin for the idea).

Why co-founding is so hard

1. Founders have to do a lot of things, and suck at many of them.

This is made worse by the fact that:

A. Founders are often young and inexperienced.
B. Startups are so small that incompetence is both immediately visible and deeply impactful to the business.
C. Entrepreneurs often have high expectations, leading co-founders to become frustrated at each other when their performance falls short.

2. The stakes are too damn high! 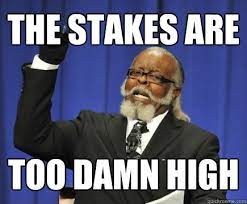 Both the upside and downside of doing a startup are extremely high: you could either become a billionaire or waste years of your life in a humiliating failure.

3. The search space is infinite

There are literally an infinite number of directions you can take at a startup — especially pre-PMF, when you could decide to pivot to completely different ideas. It is hardly surprising that people disagree on which way to go.

One co-founder will inevitably be more committed, work harder and grow faster than the other — and yet have roughly as much equity, making the other one effectively free-ride on their hard work.

Firing a co-founder is extremely difficult, both legally and psychologically.

So, to add it all up: imagine that you’re stuck for years on a small boat with someone else, lost on the Amazonian river.

Neither of you can get out; you row your very mightiest, and are pretty sure you just saw the other guy light up a joint; you’re both hungry, stressed out and sleep deprived; you need to decide together which turns to make multiple times a day; and which way you go could either kill you, or make you successful beyond your wildest dreams.

“But I need a technical co-founder”

One common reason why people don't want to go solo is because they "need a technical co-founder."

First, this can be a red flag, as for many people that means “I’ll find someone to build this for me in exchange for just half of the company.” Make sure that you do bring something real to the table, whether it is expertise in design, marketing, product, etc.

But I also find this line of reasoning less and less valid as capital becomes more plentiful. There are more than 10 times more VC dollars invested today than 10 years ago (source).

Too much capital is chasing too few founders, forcing VCs to fund startups at earlier and earlier stages. If you have even just a few years of experience, you can now raise a “pre-seed” on a deck, yourself and an idea — and then use that money to hire a founding engineer.

And it’s easier to hire that engineer once you have funding!

Sure, being solo will lower your valuation — especially if you’re not technical. So do make sure that you already have a few solid first hires lined up, ideally just waiting for the funding to start. It will also be hard to raise if you don't have at least that.

But if it’s dilution you’re worried about, you’ll find that a pre-seed at a lower valuation is a lot less dilutive than the 50% you’d give to a co-founder.

It’s dangerous to go together, take this

Your mileage may vary! Maybe you really have found your business soulmate, and couldn’t imagine going without them. A good co-founder relationship certainly can develop into a productive, lifelong, highly synergistic partnership.

If you still decide to go ahead, here are a few things to keep in mind:

Most importantly, find someone whose character and integrity you trust, and whom you’ve known for at least a few years.

This must be someone you’ve already been in a stressful situation with — people reveal their true selves under high stress.

Ignoring this is a frequent mistake: people get in business with someone they think is a safe bet, because they’ve known each other for a long time. But you don’t know someone until you’ve been in a conflict with them.

This requirement is so important that you should create it artificially if you need to. Try putting your co-founder and yourself in a situation of too little food, too little sleep, too little space — maybe some form of extreme camping (Burning Man?). It may sound silly, but would be well worth the price.

Whatever you do, do not go “co-founder dating.” This is the single most important decision you will make in the lifetime of your company. No amount of dating or interviewing will suffice — if you don’t already know someone you’d feel not just okay, but elated going in business with, then you’re going solo.

That doesn’t mean you shouldn’t voice your concerns or opinions about the other person’s area of responsibility — it is not only okay that you do, but indispensable. But when you do so, you should keep in mind who will be the ultimate decision maker. Tall fences make good neighbors.

3. Have the tough talks early on.

Do define ahead of time which decisions will require unanimous consent, and which can be made unilaterally, and by whom. Put it in writing.

Especially consider situations like wanting to sell the company, or having to pivot.

4. Formalize things as early as you can — ideally before a single line of code is written.

You wouldn’t believe how many startups end up in lawsuits because of things as silly as “I was in the dorm room when he had the idea” — even when the two "co-founders" were BFFs.

That doesn’t mean you should create a C Corp the moment your stoner of a roommate slurs “dude — Tinder but for dogs.”

But at least send an email, specifying ownership percentages, Intellectual Property, vesting and exit clause (the most important part of any contract).

Let’s work on Tinder for Dogs together.

All IP belongs to the company we’ll form.

This is unilaterally severable by either of us for no compensation, after which we’d both be free to go our own way and do whatever we want, related or not to this idea.”

5. Invest a lot in your co-founder relationship

Your job as a founder is to protect and grow your business.

That means systematically identifying and mitigating the greatest risks to your company. And, as noted earlier, a co-founder breakup is near the top of this list.

So treat your co-founder relationship as the existential risk that it is. Think of your “social capital” with them very literally: at some point, either this capital will be redeemed for a ton of money; or a negative balance will, literally, bankrupt your startup.

In particular, invest a lot of time in getting in sync with your co-founder — that will mean at least two hours of 1:1s every week. Do not gloss over disagreements — address them head-on.

If either of you ever gets emotional during one of your 1:1s, you should withdraw, for the sake of the relationship.

Emotions cloud people’s thinking — there can be no good outcome to a conversation that’s turned emotional. You can say “it feels like you’re emotional, I suggest we take a time-out, sleep on it and resume tomorrow.”

Finally, in the (unfortunately, likely) event that things go wrong, just remember to be on your best behavior.

Both sides should always stay calm, logical and respectful. The tenser things become, the more important it is to keep this in mind.

If one person leaves, the other should strongly consider giving them a good amount of equity (perhaps 1% or more), even if they haven’t hit their cliff.

Always be “on the extreme side of fair” — even if that goes against your self interest.

If you need a prosaic reason to behave, remember that it’s a small world. Protect your reputation at all costs — word travels fast.

[1]
The “severable by either of us” part is important. It does expose you to the other person realizing this is a great idea and, wait, why don’t I fire my co-founder so I have it all for myself?

This would be stupid and short-minded of them. If they do that, they’ll have done you a huge favor and saved you from years of immense pain getting in business with the wrong person.

Plus, this whole agreement shouldn’t last more than a few months anyway, until you’ve formed an actual company and got proper contracts drafted by actual lawyers.