Samsung may finally have to adopt Seamless Updates with Android 13

source link: https://www.androidcentral.com/apps-software/android-13-ab-seamless-updates
Go to the source link to view the article. You can view the picture content, updated content and better typesetting reading experience. If the link is broken, please click the button below to view the snapshot at that time. 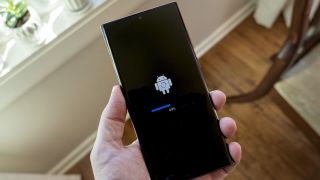 What you need to know

We all love updates, but sometimes they can get in the way of getting things done. If you frequently hit the "Install later" button on your notification, you're not alone. However, Google has made the process much less bothersome with A/B Seamless updates and apparently wants all Android OEMs to adopt this, including Samsung.

In a report by Mishaal Rahman, senior technical editor at Esper, Google could mandate that Android OEMs adopt A/B Seamless Updates for devices shipping with Android 13.

If you're unfamiliar, A/B Seamless Updates are what phones like the Pixel 6 use to install an update, allowing you to continue using your device while the software installs in the background. That is, until the moment you need to reboot the device, allowing you to get back to your scrolling as quickly as possible. It does this by creating an inactive partition of the Android OS — which is the one being updated —while you use the active one. It's a lot less troublesome for consumers because it doesn't keep them from using their phones for an extended period of time.

It also allows users to roll back updates in case something goes wrong during the update process.

However, not every Android OEM has adopted this, as many Samsung Galaxy owners can attest to. In fact, Google was apparently going to make it mandatory with Android 11, then changed its mind. And the Galaxy S22 notably does not support A/B Seamless Updates either.

Part of the reason is likely due to the amount of storage that was needed for it to work when this feature was first made available. However, as Rahman explains, Google has taken strides to address that with virtual A/B partitions, dramatically reducing the necessary storage.

Rahman goes into extensive detail about these update methods, but essentially it's good news for OEMs that have been holding back on adopting A/B Seamless for Android phones. Additionally, it's good for consumers that have been hoping for companies like Samsung to embrace it.

That said, it appears that it's only mandatory for phones that ship with Android 13, meaning we may not see this on Samsung phones until at least the Galaxy S23.

Derrek is a long-time Nokia and LG fanboy who loves astronomy, videography, and sci-fi movies. When he's not working, he's most likely working out or smoldering at the camera.