source link: https://www.businessinsider.com/putin-ally-kadyrov-unhappy-about-ukrainian-russian-prisoner-swap-2022-9
Go to the source link to view the article. You can view the picture content, updated content and better typesetting reading experience. If the link is broken, please click the button below to view the snapshot at that time. 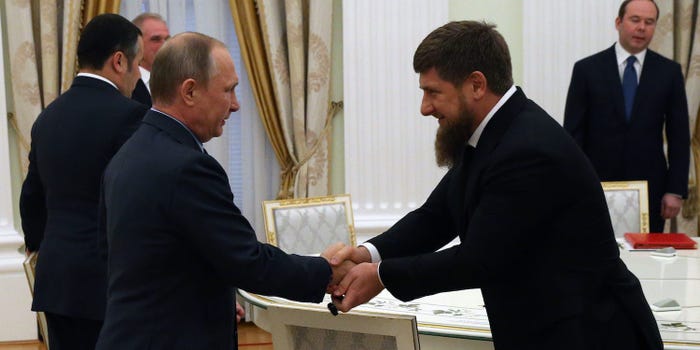 One of Vladimir Putin's top military allies broke rank and sharply criticized the Russian-Ukrainian prisoner swap, claiming he and his Chechen colleagues were blindsided.

Ramzan Kadyrov, Chechnya's leader and typically a staunch Putin supporter, took issue with the fact that around 100 Ukrainian Azov Regiment soldiers – a battalion associated with neo-nazis – were returned to Ukraine. In the early months of the war, Chechen soldiers conscripted to help Russian soldiers clashed with Ukrainian Azov fighters in Mariupol as Russians briefly occupied the city.

Kadyrov said Thursday he was "extremely unhappy," with the swap, calling the Azov fighters "terrorists."

"I'm extremely unhappy about yesterday's news. The whole situation doesn't even make sense to me," Kadyrov said in a telegram post, according to a translation by Russian outlet Meduza. "Whenever combat or tactical decisions have been made, they've always consulted with us, the active participants in the special military operation. But now…" Kadyrov added.

On Wednesday, Ukrainian President Volodymyr Zelensky's chief of staff Andriy Yermak said in an update posted in the administration's telegram channel that 215 Ukrainians were returned as a result of the prisoner swap, which Yermak added was also negotiated by Turkish President Recep Tayyip Erdogan.

Along with 55 Russian fighters, Viktor Medvedchuk, an MP and one of Putin's staunchest Ukrainian allies, was sent to Russia, Reuters reported. He was arrested by Ukrainian authorities in April.

Among the 215 Ukrainians released were 100 fighters from the controversial, hard right-wing Azov Battalion, which Russia has previously called "neo-nazis." Some founding members of the paramilitary group which sprouted as a result of Russia's 2014 invasion of Crimea have also worn nazi paraphernalia and ascribed to the moniker.

"Handing over even one of those Azov terrorists should have been out of the question," Kadyrov wrote in his post.

He also added that he would continue following Putin's orders.

"Those at the top of the Defense Ministry and the FSB can see things much more clearly," Kadyrov wrote, adding that his forces would adhere to "our main Unshakeable principle: that we will follow all orders from our Commander in Chief!"

On Wednesday, 10 foreign fighters fighting on behalf of Ukraine who were captured by Russia – including two Americans – were also released in a settlement negotiated in part by Saudi Arabia. The bilateral prisoner swap is a massive coup for Ukrainians, who have made considerable gains against Russian invaders in recent weeks.