source link: https://www.businessinsider.com/capitol-rioter-who-testified-jan-6-hearing-avoids-jail-time-2022-9
Go to the source link to view the article. You can view the picture content, updated content and better typesetting reading experience. If the link is broken, please click the button below to view the snapshot at that time.

US Markets Loading... In the news
Home Chevron iconIt indicates an expandable section or menu, or sometimes previous / next navigation options. Politics 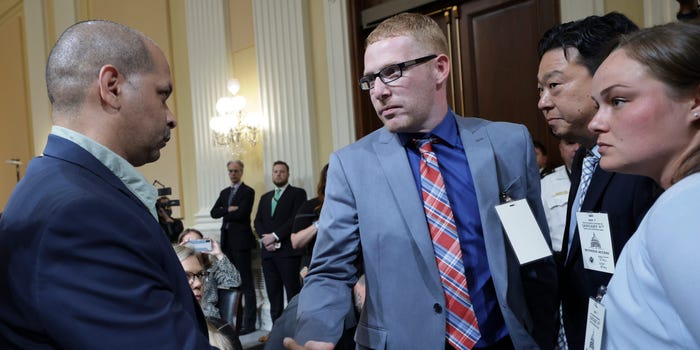 Stephen Ayres (C), who entered the U.S. Capitol illegally on January 6, 2021, greets U.S. Capitol Police Sgt. Aquilino Gonell (L) at the conclusion of the seventh hearing by the House Select Committee to Investigate the January 6th Attack on the U.S. Capitol. Kevin Dietsch/Getty Images
Sign up for our newsletter to receive our top stories based on your reading preferences — delivered daily to your inbox.
Email address
By clicking ‘Sign up’, you agree to receive marketing emails from Insider as well as other partner offers and accept our Terms of Service and Privacy Policy.

An Ohio man who testified before the January 6 committee earlier this year received two years of probation for his role in the Capitol attack — avoiding any jail time.

Stephen Ayres, 41, pleaded guilty in June to one misdemeanor charge of disorderly or disruptive conduct in a restricted building. The charge carries a maximum one-year prison sentence, but a federal judge on Thursday sentenced Ayers to probation only, acknowledging and accepting his displays of remorse.

Ayres made headlines in July after his televised testimony before the House Select Committee investigating the January 6 insurrection when he apologized to three police officers who defended the Capitol against a mob of pro-Trump rioters that day.

In court this week, Ayres apologized a second time, telling the "American people" that he was sorry for his behavior, according to The Associated Press.

"I pray every day for the officers that are struggling with this, the families that lost their loved ones," Ayres said. "I just hope one day I can wake up and not have to live with it every day," he said.

Prosecutors had recommended a sentence that included 60 days of incarceration, but Ayres ultimately evaded jail time after US District Judge John Bates said he believed Ayres had genuinely repented for his actions, including his testimony before the Jan. 6 panel.

An attorney for Ayres did not immediately respond to Insider's request for comment.

During his July testimony before the committee, Ayres said he had believed Trump's lies that the 2020 presidential election was stolen, which led him to breach the Capitol on January 6.

At least 919 people have been arrested in connection to the siege and nearly 400 people have pleaded guilty.

Deal iconAn icon in the shape of a lightning bolt.